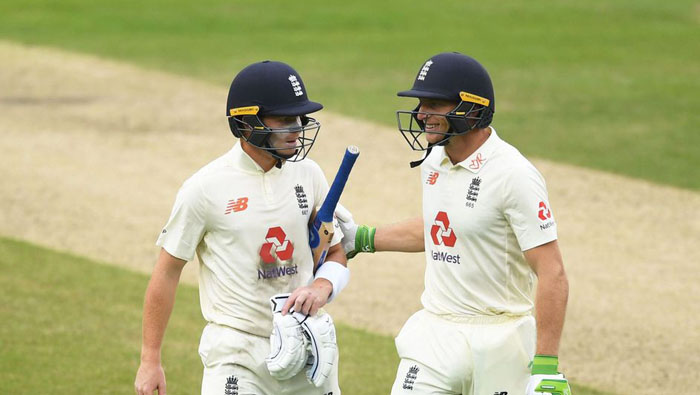 Manchester: After being put into bat, England ended day one in Manchester on top as Ollie Pope and Jos Buttler put together an unbroken 136-run stand to leave England 258/4 at the close.
Both sides made changes to their line-ups from the second Test, with Windies bringing in spinner Rahkeem Cornwall in place of Alzarri Joseph. England were forced to rebalance their side with it appearing likely that Ben Stokes will not be able to bowl for at least the first innings of the match, and so dropped Zak Crawley and Sam Curran to make way for the return of Jofra Archer and James Anderson.
After electing to bowl first, Windies got immediate reward in the form of Dom Sibley's wicket with Kemar Roach pinning him in front for a duck in the opening over. Rory Burns and Joe Root steadied the ship with a 46-run partnership lasting 20.3 overs before a superb piece of fielding by Roston Chase saw Root run out attempting a quick single.
Burns formed another good partnership with Ben Stokes, putting on another 45 runs. But Roach struck again, angling a ball in past Stokes' inside edge to clatter his stumps to leave the score at 92/3. Another promising partnership for the hosts was ended by Roston Chase, as Burns – having reached his first fifty of the series – tried to cut one from the off-spinner, but instead edged to Cornwall at slip who took a sharp catch.
That brought together Pope and Buttler, who prior to this Test had mustered just 127 runs at 18.14 between them in the series. But the pair showed application to weather the storm and settled in nicely as the partnership grew. Pope brought up the fifty partnership and his own fifty with a sumptuous cover drive for four as he began to accelerate.
Buttler showed little interest in playing anything but the most over-pitched of deliveries outside off stump, and had shown little aggression before he seized upon a pair of half-volleys from Cornwall to hit two sixes in three balls.
Both batsmen rode their luck at times, with a couple of edged drives flying safely through gaps in the field, but for the most part they batted with discipline. West Indies delayed taking the second new ball for a couple of overs, allowing Buttler time to move to his own fifty. The day was cut short with the light fading too much for play to continue, leaving England 258/4 at stumps with Pope just nine runs shy of what would be his second Test hundred.