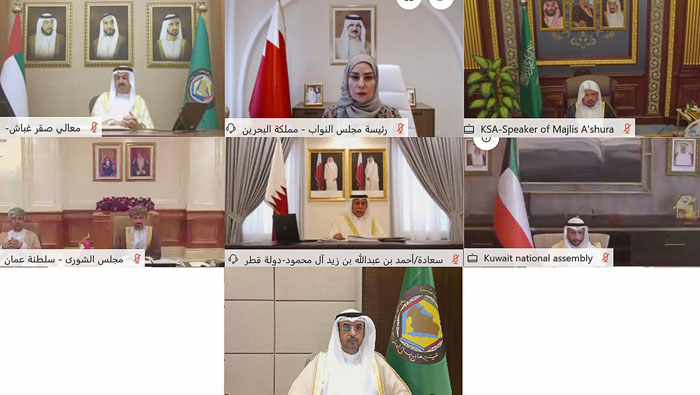 Muscat: The heads of the GCC Shura, Representatives, National and Ummah Councils took part in the 13th regular meeting via video conference, on Tuesday. They expressed their sincere wishes to His Majesty Sultan Haitham Bin Tarik to continue with the Sultanate’s march of comprehensive development.
They also recalled and praised the efforts and contributions of late His Majesty Sultan Qaboos bin Said bin Taimour as one of the founders and supporters of Arab Gulf Cooperation Council (AGCC).
Majlis Al Shura was represented in the meeting by Khalid bin Hilal Al Mawali, chairman of Majlis Al Shura who in his speech reaffirmed that the cooperation among the AGCC States has reflected in curbing the impacts of COVID-19 pandemic.
The participants in the meeting prayed to the Almighty Allah to grant the Custodian of the Two Holy Mosques King Salman bin Abdulaziz Al Saud good health and speedy recovery. They also prayed to the Almighty Allah to grant Sheikh Sabah Al Ahmed Al Jaber Al Sabah, Emir of Kuwait, good health and wellbeing.
The meeting was chaired by Saqer Ghobash, speaker of the UAE Federal National Council.