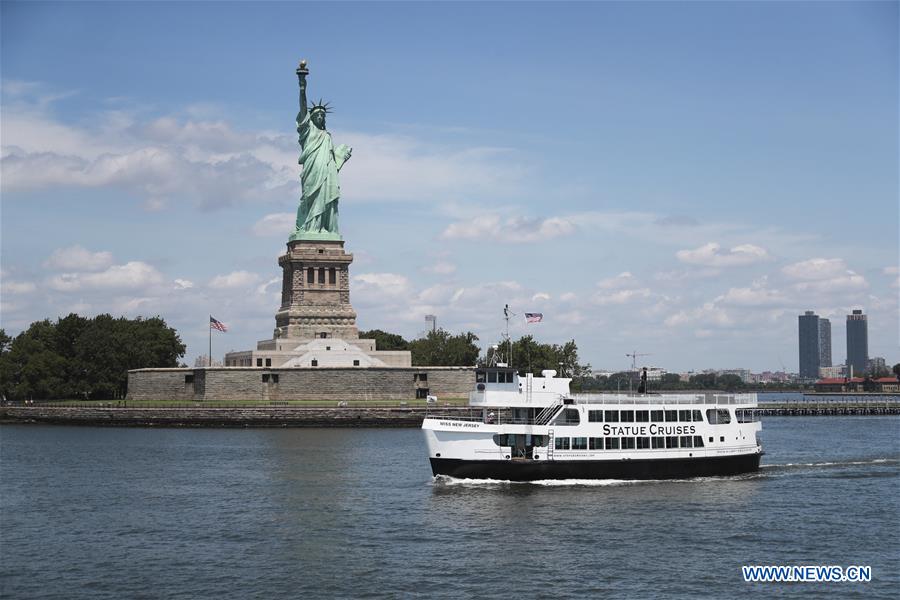 In the final phase of New York state's reopening plan, lower risk outdoor arts and entertainment activities, such as television and film production, can resume. Botanical gardens and zoos can reopen at 33 percent capacity, according to the state and city governments.

The Liberty Island where the Statue of Liberty is located became open on Monday, while the interior of the statue and the museum remain closed to the public.

The Empire State Building Observatory on the 86th and 102nd floors also reopened on Monday with 60 percent capacity, according to the Empire State Realty Trust.

Professional sports can now play without fans. The U.S. Open tennis tournament will kick off in Queens borough of New York City as scheduled in late August with the spectator seats empty. Governor Andrew Cuomo said in June that the U.S. Tennis Association (USTA) will take extraordinary precautions to protect players and staff.

Unlike other phase four regions in the state, indoor entertainment and cultural venues such as malls and museums remain shut in New York City due to the heightened risk of infection indoors that occurred in many other states.

The resumption of indoor dining has also been postponed, and the city launched the Open Restaurants program earlier this month, allowing restaurants to serve customers on the city's Open Streets with no access to vehicles during weekends.

Public schools across the state are expected to reopen in fall, but state and city officials are still finalizing specific measures to ensure the safety of teachers and students.

Last week, Cuomo announced new guidance on reopening schools which mandates that schools can reopen only when the region's daily infection rate remains
below 5 percent, using a 14-day average. If the rate rises above 9 percent, using a seven-day average, after Aug. 1, schools will close.

At the city level, Mayor Bill de Blasio has revealed three models that would put students in different groups for in-person instruction, and each group would spend two or three days in school every week. While the students are not in class, they will continue with remote learning.

New York City has reported 218,478 COVID-19 cases by Monday afternoon, with a death toll of 23,411, according to the city's health department.

Though New York state as a whole has bent the curve of the COVID-19 pandemic with infection rate down to around 1 percent in past weeks, the rapid rise in cases in southern and western U.S. states presents a risk of a second wave to New York.

"I feel like we are standing on a beach, and we're looking out at the sea and we see the second wave building in the distance, so I want all New Yorkers to be on high alert," Cuomo said last Friday at a teleconference.

To reduce the risk to a minimum, the state government has dispatched enforcement teams to airports to greet arriving passengers from states with high COVID-19 infection rates while requesting a completed form with their contact information.

Travelers who leave the airport without handing in the form will be subject to a 2,000-U.S.-dollar fine and even a mandatory quarantine.

The governor also urged New Yorkers to stay on high alert. A video posted online showing an outdoor party outside a bar with hundreds of people without masks in Queens Friday night has made Cuomo threaten to roll back the reopening.

"You can get sick in your 20s. You can die in your 20s. Even if you live by the theory you're a superhero, you will go home and you will transfer it to someone else," said Cuomo on Monday at his briefing.

Mayor de Blasio on Monday also called the noncompliance of safety guidelines "unacceptable," saying there will be "heavier enforcement efforts" around bars and restaurants.

"We don't want to shut down bars, but if we have to shut down a few of those, it is a hell of a lot better than seeing the coronavirus start to surge again in this city," the mayor added.