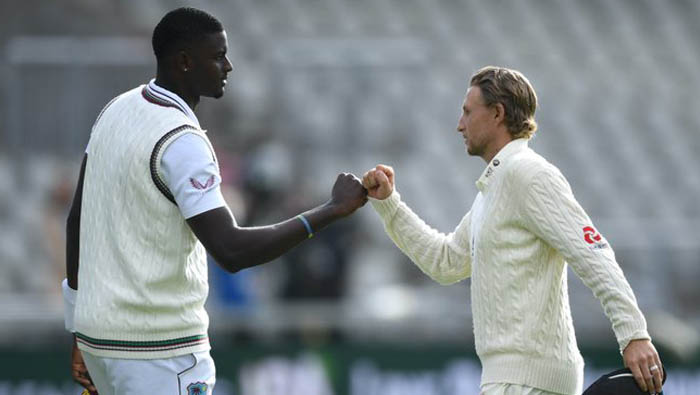 Manchester: England managed to bowl West Indies out on the final day in Manchester to win by 113 runs with just under an hour remaining, to level the series at 1-1 heading into the third and final Test.
Ben Stokes and Joe Root began the day looking to add quick runs, with the former signalling his intent by planting Kemar Roach for a maximum over long-off in the first over of the day. Root was run out as the pair looked to run a bye to the keeper, but Stokes continued to pile on runs, reaching his fifty from 36 balls with another big six.
Eventually the declaration came setting West Indies an improbable 312 runs to win from 85 overs.
Kraigg Brathwaite and John Campbell seemed to be thinking about winning rather than drawing though, and the pair looked happy to play some shots. It proved to be their downfall though, as Campbell feathered an expansive drive off Broad to give England their first wicket from just the fifth ball of the innings – albeit with seven runs already on the board.
The hosts didn't have to wait long for more success either, with Brathwaite being beaten by Chris Woakes, and Broad castling Shai Hope to leave West Indies three down after just 11 overs at lunch.
Soon after the break, Roston Chase became Broad's third victim as he padded up to a ball which was adjudged to have been going on to hit off stump. Jermaine Blackwood and Shamarh Brooks stopped the rot though, and they battled through against persistent bowling from England.
Finally though, in the last over before tea, Ben Stokes made the breakthrough. Just three balls after chasing an off drive all the way to the boundary off his own bowling, he managed to take Blackwood's glove with Jos Buttler completing an athletic catch down the leg side.
Straight after the break, Woakes struck again – his 100th wicket in Tests – to remove Shane Dowrich for a duck. Brooks and Jason Holder held firm for a while, but eventually Sam Curran managed to end the former's innings after a well-made 62 to go with his first-innings 68.
Bess removed Holder a short while later, spinning one through the gate to bowl the Windies captain for 35. Bess was in the action again for the next wicket, as Alzarri Joseph edged an attempted drive off Stokes to the spinner's waiting hands at point. Kemar Roach and Shannon Gabriel managed to hold off England for long enough to reach the final drinks break, but a superb catch by Ollie Pope at short leg off the first ball after the resumption confirmed England's victory.
The last Test begins at the same venue on Friday 24 July.