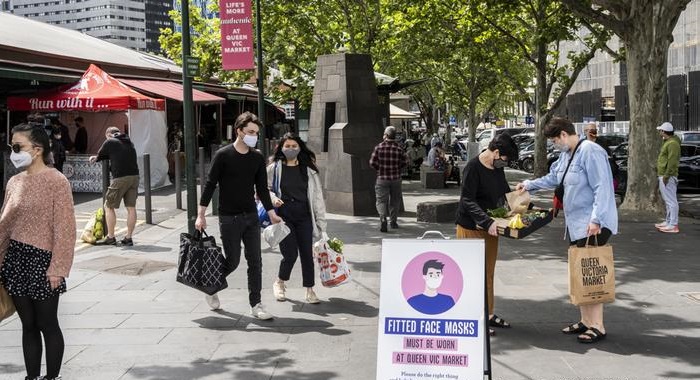 The total number of recorded cases worldwide ticked over to 40 million early on Monday, according to the Johns Hopkins University tally. The milestone coincides with accelerating numbers of cases across much of Europe. The true number of people to have contracted the virus is not known for a number of reasons: testing capacity was scant early in the pandemic; some carriers can exhibit few or even no symptoms; and some countries are suspected of underplaying their numbers or of failing to enthusiastically track down potential carriers.

Residents of Australia's second-biggest city, Melbourne, were allowed on Monday to leave their houses for more than two hours a day for the first time since July. The city's residents had been barred from leaving their homes with a few exceptions, such as shopping for essentials, exercising or going to work. They still, however, face a number of travel and other restrictions.

Australia's most populous state, New South Wales, is also set to start relaxing restrictions as the number of new cases continues to fall. From Friday, the number of people who can gather outdoors and attend weddings will increase.

A case originally thought to be New Zealand's first instance of community transmission in three weeks, was likely the result of an infection on a cruise ship that had arrived from Australia, officials said on Monday.

Genome testing showed that the infection, identified on Sunday, was a strain of coronavirus not detected in New Zealand before, according to director-general of health Ashley Bloomfield. New Zealand currently has 37 active cases.

China's has recorded 4.9% year-on-year economic growth for the third quarter, with consumer spending and industrial production rising to pre-pandemic levels. China was the first country to record coronavirus cases and was among the first to start reopening its economy.


The number of confirmed coronavirus cases in Germany increased by 4,325 to 366,299, while the death toll rose by 12 to 9,789, according to the Robert Koch Institute for infectious diseases. The figures come as Germany grapples with a second wave of infections, with daily caseloads last week exceeding previous records from the spring.

Meanwhile, patients suffering from mild respiratory diseases in Germany can be given sick leave for up to seven calendar days by telephone from Monday. Diagnoses can be made following an extensive telephone survey with the patient, with the goal being to keep people out of waiting rooms.

Belgium's midnight-to-5 a.m. curfew will come into effect on Monday, while cafes and restaurants will close across the country for four weeks. Sales of alcohol will also not be permitted later than 8 p.m.. Belgium, a country of roughly 11.5 million people, has seen over 10,000 deaths and 213,000 cases since the start of the pandemic.

"The Commission's aim is to be able to distribute these funds at the beginning of 2021, and this timeline must be kept," said Lagarde. "We also need rapid progress on the political side, in particular the adoption of measures by national parliaments."

The former French finance minister urged leaders to consider making the recovery fund permanent and setting up a permanent budget for the euro zone.

Switzerland is introducing new restrictions on Monday, including the broadening of a mask mandate and limitations on social gatherings. Face and nose coverings are required in public indoor areas, while gatherings of more than 15 people are forbidden.

Italy has also announced new restrictions coming into force this week. They allow mayors to close public squares and other gathering places after 9 p.m., while restaurants and bars are restricted to table service only after 6 p.m.. Local festivals have been banned.

South Africa's health minister, Zweli Mkhize, and his wife tested positive for the virus, health officials announced on Sunday. South Africa is Africa's hardest-hit country, with over 700,000 recorded cases and 18,408 deaths since the start of the pandemic.