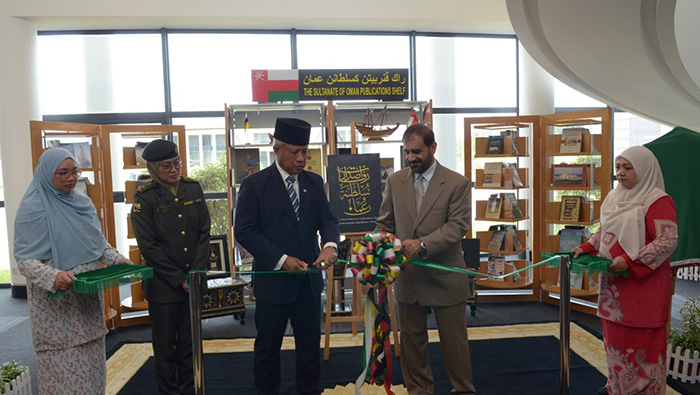 The Second Minister of Defence said, “I would like to extend my sincere thanks to the Sultanate’s Embassy for its generous gesture to present a valuable collection of Omani publications that will enrich the library of the Brunei Defence Academy, contribute to increasing the interest of military officers in reading, and increase our knowledge of the rich history of the Sultanate of Oman and its accelerated development process. It is also another “practical evidence” about the strength of the constructive cooperation between the two countries”.

This came on the sidelines of opening the fifth shelf of the Omani publications in Brunei, which contains more than hundred books.

The embassy had previously launched four shelves for Omani publications in the libraries of Brunei state universities during the past four years.

The move comes as part of the embassy’s efforts to highlight the Omani cultural heritage and publish and distribute Omani publications, and make them accessible to researchers and the public in Brunei.

The shelf contains publications highlighting the contributions of Omani scholars, thinkers, and researchers in enriching intellectual and scientific production, in a manner that meets the needs of students and researchers in many types of knowledge, especially with regard to Omani affairs.

Sheikh Ahmed bin Hashel Al Maskari, Sultanate’s Ambassador to Brunei Darussalam said, “The launch of Al Muhallab bin Abi Sufra’s shelf for Omani publications came within the framework of the embassy’s endeavour to continue strengthening the distinguished relations of cooperation and friendship between the Sultanate of Oman and Brunei Darussalam in the field of cultural cooperation and related fields, support initiatives launched by the Brunei government to encourage young people to read and learn by enriching national libraries with different types of books that cover various fields of knowledge”.

The ambassador pointed out that the Omani publications shelf was named after Al Muhallab bin Abi Sufra Al-Azdi of Oman, in recognition of his exceptional leadership personality who excelled in making victories and his role in the Islamic conquests during the first Hijri century that included land beyond the river in central Asia, and had a great impact on enriching Islamic civilization. Scholars and thinkers like Al Khwarizmi and Al Bukhari came from these areas.

The launching ceremony was held in conjunction with the graduation of the tenth batch of the command and staff course held by the Defense Academy of the Royal Brunei Armed Forces (RBAF).

On the sidelines of the launching ceremony of Al Muhallab bin Abi Sufra’s shelf for Omani publications, a cultural exhibition was held which included photos showcasing heritage, cultural and tourism sites in the Sultanate, and the most prominent features of the Omani renaissance.