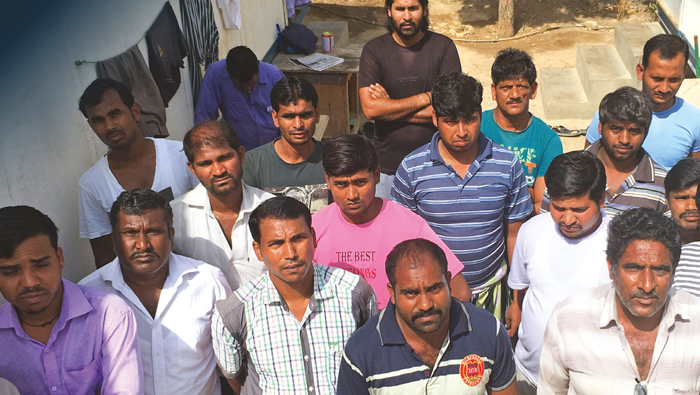 Muscat: Dozens of angry workers are stranded in Oman after the company stopped paying wages and failed to renew employment visas.
Get your essential daily briefing delivered direct to your email inbox with our e-newsletter
More than 80 expatriate workers at a construction site near Muscat, including 50 without valid labour cards, have been stranded in their camp without a job, salary or proper food and medical support for the last four months.
Some have even resigned – but the company refused to accept the resignations.
Now, they cannot leave as their visas have expired and they are effectively living in Oman illegally.
“This year, the majority of them got salary only for three or four months. The rest of the salary is pending. We don’t know when the company will clear the dues and when we will be able to send money to our families back home,” one stranded Indian worker, sitting idle for the last three months in the camp as the construction company is lacking projects, told Times of Oman.
Article 51 of the Oman Labour Law says employees who receive their salaries monthly shall be paid once a month at least.
Prasad M K, a legal advisor in Muscat, said that employers are bound to pay salary every month if the job contract cites monthly and the worker has the right to lodge a complaint or to stop working if the employer fails to follow the signed job contract made on the basis of Oman Labour Law.
While some of the workers are holding a valid labour card, more than 50 don’t have one, landing them in more trouble.
“Some are even having health issues. Whenever, we call the office seeking assistance, they refuse. As we don’t have valid cards, we can’t approach the hospitals,” the worker added. The legal advisor said an expat will have to pay OMR30 at the immigration counter at the airport and OMR18 at the Ministry of Manpower counter for every month they remain in Oman.
“Payment has to be made by the company,” the legal advisor said.
The workers have lodged a complaint with the Indian embassy in Oman and are waiting for a positive outcome.
The majority of the workers had submitted their resignations seeking exit from the company when their labour cards were about to expire, but unfortunately the company has not accepted their resignations.
“Workers who have not remitted money home due to non-payment of salary said that their families are struggling to make ends meet back home.
“We have children studying, aged parents and all. How can they run the family when we don’t remit money? They are literally starving,” the workers added.
The workers also added that they are also facing a food crisis.
“Food is not at all good. However, as we have to stay alive, we are adjusting with it,” another worker added.
A company which was supplying food for the workers stopped on August 5 as payments were pending.
“We have to get around OMR30,000 as payment for supplying food for the last five months. We can’t run it, so, we have stopped it,” the food supply company official said, adding that they have approached legal advisors seeking support.
Meanwhile, a senior official from the company said that economic conditions led to the crisis.
“Due to conditions, we are struggling to get funds released on time from our clients. This is affecting the payments for workers. We won’t betray the workers. Conditions are bad. But we are hopeful that we can overcome the crisis,” the senior official told Times of Oman.
However, Article 54 says that salaries, rights, other benefits and all other amounts due to the employee or his successors according to the rules of this law shall have priority over all the employer’s debts except the maintenance awarded by the Sharia Court.
Oman trade union leaders said that companies cannot leave workers in such a difficult situation.
“Workers’ salary has to be paid on time. It cannot be held back after they resign. It is the company’s responsibility to renew the labour cards. Workers cannot be left in the lurch,” Mohammed Al Farji, board member of General Federation of Oman Trade Union (GFOTU), said.
Saud Salmi, another trade union leader in Oman, said that employers should not break the law.
“Companies should not violate rules and put workers in trouble,” the trade union leader said, adding that it is the responsibility of the employer to repatriate an expatriate worker with all dues cleared if he resigns.
Oman’s economy has been hit due to a global oil price dip leading to lack of projects.
Recently, Shahswar G Al Balushi, CEO, Oman Society of Contractors, said Oman is facing a construction crisis due to the oil price dip leading to salary delays and other issues.