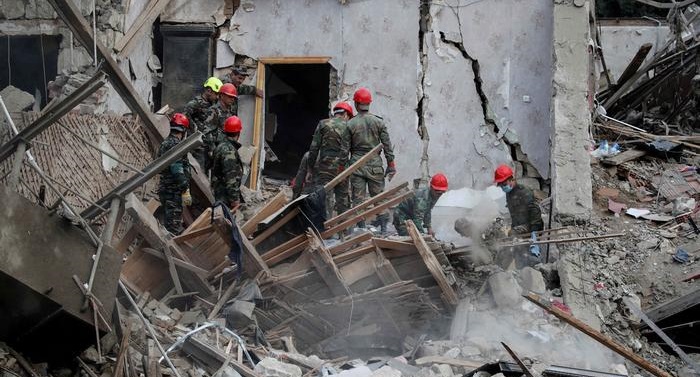 Rescuers pull bodies from the wreckage in Ganja

Baku: An Armenian rocket has hit a residential building in Azerbaijan's western city of Ganja leading to the deaths of at least seven people and injuring 33 others, including children, the country's Foreign Ministry said on Sunday.

In the early hours of Sunday, Azerbaijan's Defense Ministry said that Ganja was shelled from the territory of Armenia. The Armenian Defense Ministry has refuted Baku's claims. "URGENT! New nightly missile attack by Armenia/n forces on residential area of Ganja, second largest city of Azerbaijan. 7 dead 33 wounded, including kids reported," the ministry tweeted and shared photographs from the accident site.

Earlier in the day, Azerbaijan's Prosecutor General's Office said that at least five people were killed and 28 others were injured in Ganja.

During their talks in Moscow on Friday, foreign ministers of Armenia, Azerbaijan, and Russia agreed to a ceasefire. Nonetheless, Baku and Yerevan have accused each other of violating the ceasefire over the weekend.

On the night from Saturday to Sunday, explosions were heard in Stepanakert, the capital of the unrecognized Republic of Artsakh (Republic of Nagorno-Karabakh). The city of Shusha, located about 12 kilometres (7.5 miles) from Stepanakert was also shelled, according to a Sputnik correspondent.

Late on Saturday, spokesperson of the president of the unrecognized Nagorno-Karabakh Republic, Vahram Poghosyan, said Shusha and the town of Martuni had been shelled by Azerbaijan despite the active ceasefire.

Poghosyan said that the shelling of Stepanakert amid the ceasefire that came into force at noon on Saturday was disrespectful of the Friday talks in Moscow.