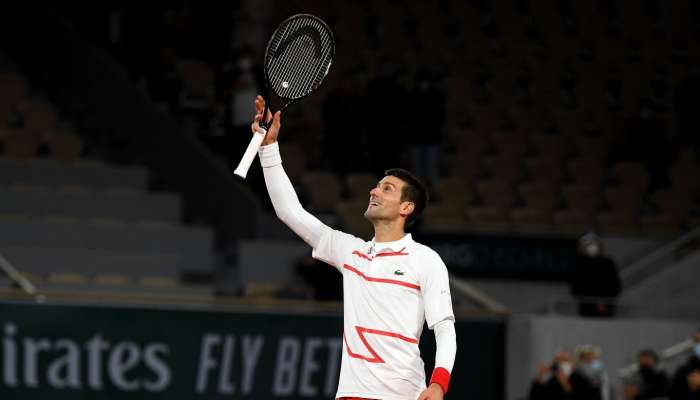 Paris: Serbian tennis player Novak Djokovic outclassed Russia's Karen Khachanov in the fourth-round clash to progress to the quarter-finals while Petra Kvitova had a comfortable 6-2, 6-4 win over China's Zhang Shuai on Court Philippe-Chatrier on Monday.
The world number one defeated Khachanov 6-4, 6-3, 6-3 to reach the quarter-finals on the Parisian clay for the 11th consecutive year. It is the second straight edition in which Djokovic has reached the last eight without dropping a set. The Serbian has accomplished that feat three times in his 16 appearances.
Djokovic will next play against Pablo Carreno Busta or Daniel Altmaier for a spot in the semi-finals.
The previous best for Petra Kvitova in Paris was the semifinals in 2012 when she lost to eventual champion Maria Sharapova 6-3, 6-3.
"I got a bit emotional last two points of my match. I really started to think still about the match because in tennis we really never know when it's the end. But my memories, happy memories, when I made my comeback here in 2017, when I step on the Philippe Chatrier, I couldn't really imagine me to be in the quarterfinal of this slam. Everything just came back to me," said Kvitova, who was attacked by a break-in knife-wielding robber at her home in the Czech Republic during the off-season of 2016 which left her dominant left hand seriously injured. It was at Roland Garros that the two-time Grand Slam champion made her comeback.
"It's been long ride definitely. Everything came to my mind when I had my whole family, people who I loved to help me through the tough, tough time," said Kvitova. "I was just playing in the Philippe Chatrier, it was such nice to win the match and to be in the quarterfinal."
Kvitova went into the match quickly as she broke her Chinese opponent twice to surge to a 4-0 lead in the opening set, before serving for the set in the eighth game.
"She played really really well today. I think everything is tough. My ball is very short and she opened the court very nice and used very nice winners," said the world 39th-ranked Zhang, who has also achieved a personal best at Roland Garros by reaching the fourth round.
The Czech player fired 23 winners in the match in which she converted four of her nine break points. Despite missing a chance of serving for the win in the eighth game of the second set at 5-2, she clinched it when opportunity appeared again in the tenth to wrap up the victory with a love game.
Next up for Kvitova is Germany's Laura Segemund, who dispatched Spaniard Paula Badosa 7-5, 6-2 to advance