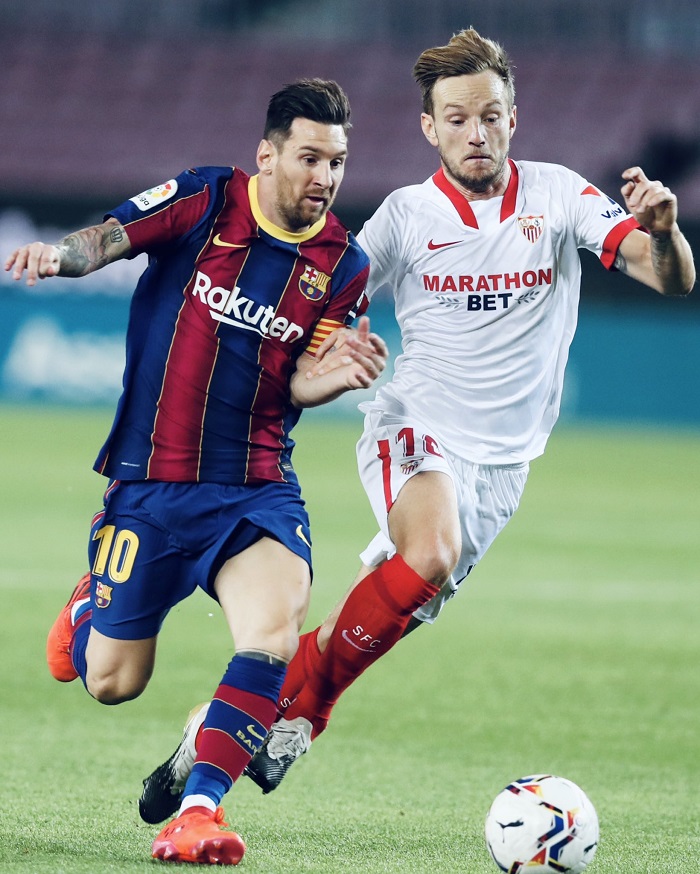 MADRID: FC Barcelona dropped its first points of the season when it was held to a 1-1 draw in the Camp Nou Stadium by Sevilla on Sunday night.

Sevilla opened the scoring in the 7th minute when Luuk de Jong fired home with his left foot after Barca failed to deal with a corner, but Barca levelled barely a minute later when Jesus Navas was unable to clear Jordi Alba's ball into the area, allowing Coutinho to pick his spot.

The first 45 minutes were entertaining, but after the break Barca began to look fatigued. Ronald Koeman made several changes, bringing Francisco Trincao, Pedri and Miralem Pjanic into the action, while Sergino Dest made his debut for the injured Jordi Alba. Despite Trincao having a late shot saved, Barca didn't do enough to win, while Sevilla looked happy with a point.

Real Madrid won 2-0 away at Levante in a game played in Villarreal's El Madrigal Stadium thanks to an excellent first half goal from Vinicius Jr, who curled his shot in at the far post, an injury time goal from Karim Benzema and a series of important saves from Thibaut Courtois, who frustrated the home side with five second half saves to send his side top of the table.

Osasuna got back to winning ways with a 2-0 win at home over Celta Vigo, thanks to a 23rd-minute goal from Facundo Roncaglia, who fired home from outside of the Celta penalty area, before crossing for Jonathan Calleri to head home the second for the Pamplona-based outfit 14 minutes from time.

Rodrigo Ely's 74th minute header, following a free kick, gave Alaves its first win of the season at home to Athletic Club Bilbao, who again disappointed just three days after suffering a home defeat to Cadiz and has dropped to second from bottom in the table.

Cadiz and Granada shared the points in an Andalusian derby which began with German Sanchez's header for the visitors in the 27th minute before Ivan Alejo's driven shot assured Cadiz its first home point of the season three minutes after halftime.

Atletico Madrid had Luis Suarez in its side but was held to its second 0-0 draw in a week as the team failed to break down Villarreal with just two shots on target in the entire 90 minutes.

Real Sociedad had a comfortable 3-0 win at home over Getafe thanks to Mikel Oyarzabal's first half penalty and goals from Mikel Merino and Portu in the 78th and 81st minutes.

Eibar won for the first time this season as Kevin Rodrigues' 91st minute goal gave it a 2-1 triumph away at Valladolid in a frantic game on Saturday.

Esteban Burgos scored from the penalty spot for Eibar after 28 minutes, only for Toni Villa to equalize for the home team eight minutes later. Marco Dmitrovic then saved a penalty, and even though Pape Diop was sent off for the second time this season with 18 minutes remaining, before Rodrigues' later header gave Eibar three vital points in injury time.

Newly promoted Elche and Huesca drew 0-0, although Huesca was the better side as Elche failed to get a shot on target.

Real Betis won 2-0 away at Valencia. Sergio Canales celebrated his return to the Spanish national team squad by opening the scoring following magnificent control and shot in the 19th minute and Cristian Tello scored Betis' second of the game with 16 minutes remaining.