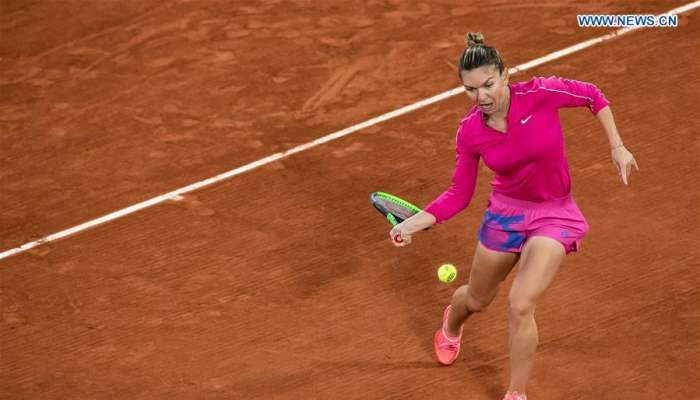 PARIS: Top seed Simona Halep's 17-game winning streak was snapped on Sunday at Roland Garros, as the Romanian ended her run for a third major title 6-1, 6-2 following a devastating performance from Iga Swiatek in the women's singles fourth-round match.

The 19-year-old Pole needed just 68 minutes to avenge her exit to the 2018 champion last year in Paris at the same stage.

"I don't know what happened actually, I felt like I was playing perfectly, I was so focused the whole match, even I am surprised that I can do that," said the 54th-ranked Swiatek, who fired 30 winners and won 81 percent of her first-serve to wrap up the victory.

"I wasn't experienced at all then, that was my first match on a big stadium like that, so I was pretty stressed," Swiatek said of her fourth-round loss to Halep last year.

"Since then, I've made huge progress because I've played a few big matches, against Simona, against Caroline Wozniacki and Naomi Osaka, and I think it helped me a lot and now I feel like I can handle the pressure," Swiatek added.

Halep didn't play at her best, especially when facing a firing teenager who combined her drop shot and backhand so perfectly throughout the match.

"She played unbelievable today and she was everywhere and she hit all the balls in a very strong, very powerful way," the world No.2 said after the match. "It was a little bit cold and I couldn't be at my best."

"I knew she was going to be aggressive. I knew that she's playing this way. Today it worked really well for her," Halep added. "At this level, nobody surprises anybody anymore because everyone has a big level and it depends on the day that you are."

Swiatek is to face another unexpected winner from the fourth round - Martina Trevisan, as the world No. 159 stunned another title favorite Kiki Bertens 6-4, 6-4 in a later match on Court Suzanne-Lenglen.

"I'm living in a dream. I came here two weeks ago to my Roland-Garros qualifying but today I'm here in the quarterfinals," said the 26-year-old Italian qualifier, who hadn't played a Grand Slam main draw before this year's Australian Open, where she suffered an early first-round exit.