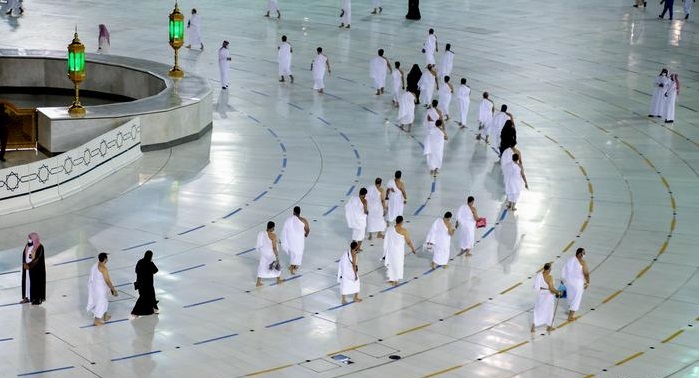 A limited number of pilgrims returned to Islam's holiest site on Sunday after Saudi Arabia partially lifted coronavirus restrictions that had been in place since March.

The Saudi government started allowing a maximum of 6,000 people a day to enter Mecca's Grand Mosque to performumrah — a pilgrimage to Islam's two holiest sites that can be taken at any time of year.

"In an atmosphere of faith and with assured hearts... the first batch of pilgrims begin the pilgrimage in accordance with the precautionary measures laid out," the hajj ministry said on Twitter.


Only Saudi citizens and residents will be permitted to enter the mosque during the first phase of reopening.

During the second stage from October 18, the number of umrah pilgrims will be increased to 15,000 per day.

Muslims from abroad will be permitted in the third stage from November 1, when capacity will be raised to 20,000, according to the Interior Ministry.

Before visitors can enter the Grand Mosque, they are required to complete an online application and reserve a specific time and date to avoid crowding. Each person has up to three hours to complete the pilgrimage.

Pilgrims must be accompanied by a health worker and are not allowed to touch the revered Black Stone in the eastern corner of the Kaaba.

Thermal sensors have been installed to measure pilgrims' body temperature and medical teams are present in case of an emergency, according to Mecca authorities.

The mosque is also being cleaned and sterilized multiple times a day.

Hopes to return to full capacity

State TV showed on Sunday what appeared to be fewer than 50 pilgrims circling the Kaaba at the same time and walking several meters apart.

The decision to resume the pilgrimage was taken in response to the "aspirations of Muslims home and abroad," the Interior Ministry said in September, adding that the umrah can return to full capacity once the threat of the pandemic has subsided.

The Gulf country has registered nearly 336,000 coronavirus cases, including 4,850 deaths.