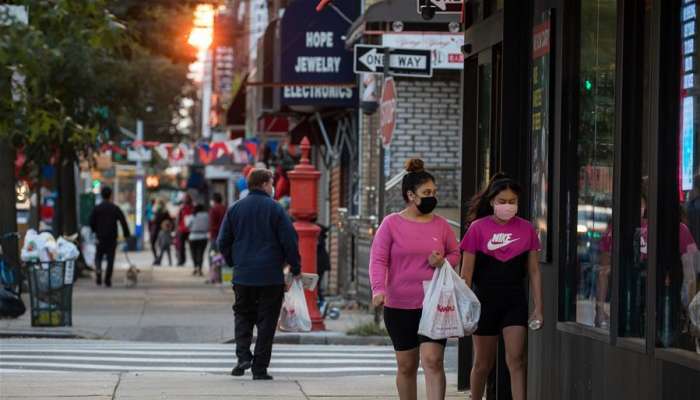 NEW YORK: Top officials of New York state and New York City on Sunday raised the alarm and introduced a set of strong measures against the COVID-19 pandemic, as school reopenings have brought high numbers of children back to campus over the past week and hotspot areas remain unbridled with unabated concentration of cases and fatalities.

New York City Mayor Bill de Blasio on Sunday announced a proposal to "close ALL schools and nonessential businesses" in nine ZIP-code areas of the city on Oct. 7 due to the uptick in COVID-19 cases recorded there.

"We've seen consistently high COVID-19 numbers in 9 zip codes across South Brooklyn, Far Rockaway and Central Queens. We're providing these areas with additional resources, but when presented with new information, we must act. We won't risk the progress we've made," he tweeted.

"This was not an easy choice to make, and let me be clear: we haven't seen any issues in these schools. We must, however, be proactive about the safety and health of New Yorkers," said de Blasio.

Also on Sunday, New York State Governor Andrew Cuomo tweeted, "We all want schools to reopen IF they can reopen safely. I have assured the parents of this state that I would not send my child to a school that I didn't know was safe. Without testing we can't assure parents and teachers of the safety of that school."

All of New York City's public middle and high schools were reopened on Thursday, which meant some 500,000 students returned to daily study either in-person or virtually. The city's public primary and preschools resumed operation in tandem in September.

COVID-19 tests are required on a regular basis for those who come to campus mostly in a cohort A/B model, but medical resources and staff are obviously short of the demand from the school district, one of the largest in the country.

In addition, Cuomo said that heavy-handed enforcement would be carried out from Monday on, as the observance of anti-pandemic rules has been weak which will in turn fuel the spread of COVID-19.

"NYS will be doing aggressive enforcement starting tomorrow," he tweeted, for "local governments have not done an effective job of enforcement in these hotspot ZIP codes."

"As we saw with bars and restaurants, when the state initiated enforcement actions compliance greatly increased," he added.

The infection rate in New York state has been above 1 percent for days, which has been considered to have set a trend of uptick.

According to the Center for Systems Science and Engineering at Johns Hopkins University, U.S. coronavirus cases topped 7.4 million and the death toll is approaching 210,000 as of Sunday afternoon. New York remains one of the worst-hit states in the country.