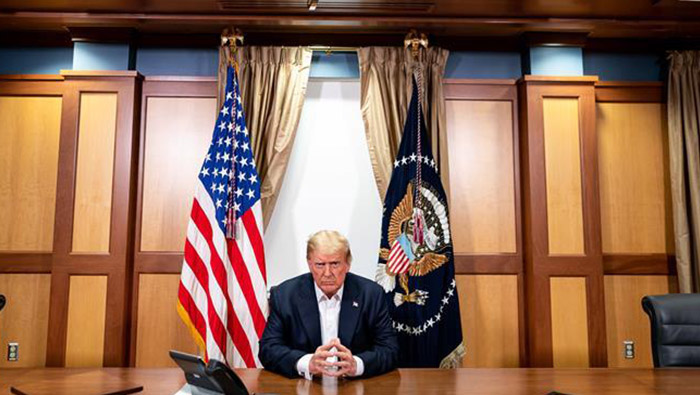 Washington: US President Donald Trump appeared eager for a quick return on Sunday as he’s undergoing COVID-19 treatment at a hospital despite concern about his condition.

Sunday evening, Trump briefly left his suite at Walter Reed National Military Medical Center in Bethesda, Maryland for a motorcade ride to greet his supporters outside the hospital. The masked president, accompanied by Secret Service agents, waved and gave a thumbs up from the backseat of a black SUV.

“I’m not telling anybody but you, but I’m about to make a little surprise visit,” the president said in a video posted to Twitter before going out for the greeting.

“That Presidential SUV is not only bulletproof, but hermetically sealed against chemical attack. The risk of COVID-19 transmission inside is as high as it gets outside of medical procedures,” James Phillips, an attending physician at Walter Reed, tweeted. “The irresponsibility is astounding. My thoughts are with the Secret Service forced to play.”

White House deputy press secretary Judd Deere defended the drive-by, claiming in a statement that it “was cleared by the medical team as safe to do.”

“Appropriate precautions were taken in the execution of this movement to protect the President and all those supporting it, including PPE,” Deere added.

Earlier on Sunday, a day after Trump’s doctors said he has been “not yet out of the woods,” they provided a rosy assessment of his condition, saying that the president could be discharged as early as Monday.

“If he continues to look and feel as well as he does today, our hope is that we can plan for a discharge as early as tomorrow to the White House where he can continue his treatment course,” Brian Garibaldi, a member of Trump’s medical team and lung specialist, briefed reporters from Walter Reed.

Trump participated in a phone call with Vice President Mike Pence, Secretary of State Mike Pompeo, and Chairman of the Joint Chiefs of Staff General Mark Milley from a conference room at Walter Reed on Sunday, according to the White House.

“So far the president is in great shape. He’s firmly in command of the government of the country,” U.S. National Security Advisor Robert O’Brien told CBS News earlier in the day, calling a transfer of power from Trump to Pence not “on the table right now.”

Trump was first diagnosed with COVID-19 on Thursday and moved to Walter Reed on Friday, where he was using Remdesivir, a COVID-19 drug made by the U.S. biopharmaceutical company Gilead Sciences, as a treatment. The president also received a dose of an experimental antibody cocktail being developed by US drug maker Regeneron.