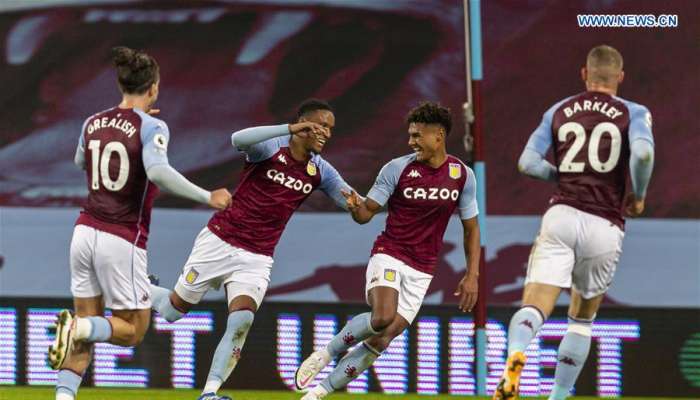 London: The weekend produced two absolutely incredible results in the Premier League as Manchester United lost 6-1 at home to Tottenham, while reigning champion Liverpool was thrashed 7-2 away to Aston Villa.
Liverpool's defence was overrun for the entire 90 minutes at Villa Park with Ollie Watkins scoring a first half hat-trick, Jack Grealish scoring twice and John McGinn and, new arrival, Ross Barkley also getting in on the act.
Although Liverpool's substitute goalkeeper Adrian was at fault for the opening goal, Villa picked holes time-after-time in the Liverpool back line and could have had an eighth when Watkins hit the bar in the last minute.
Mohamed Salah scored twice for Liverpool, but that was scant consolation as Liverpool became the first reigning champion to concede seven goals since 1953.
It was not the only stunning result of the weekend. Tottenham inflicted a humiliating 6-1 defeat on Manchester United at Old Trafford as the home side's defense imploded in a disastrous performance that Spurs exploited to the full.
United had a dream start when Bruno Fernandes scored a second minute penalty, but soon dropped behind as Tanguy Ndombele and then Son Heung-min netted for Spurs.
Things got worse for Ole Gunnar Solskjaer's team as Anthony Martial was sent off for lashing out at Erik Lamela, and Harry Kane and Son made it 4-1 before halftime.
Serge Aurier added a fifth soon after the break, and a Kane penalty 10 minutes from time rounded off the scoring in a game that could leave Solskjaer's job at risk.
Arsenal continued its positive start to the season with a 2-1 win at home over Sheffield United, but Mikel Arteta's side had to endure a frantic end to its game after David McGoldrick curled home a spectacular 83rd minute goal for the visitors.
Arsenal had led 2-0 through goals from Bukayo Saka and Nicolas Pepe, but McGoldrick's goal left them clinging on for the final whistle.
An excellent team performance from West Ham saw them rewarded with a surprise 3-0 win away over Leicester City, who had demolished Manchester City 5-2 a week ago.
Michail Antonio, Pablo Fornals and Jared Bowen scored West Ham's goals in the 14th, 34th and 84th minute of the game.
Meanwhile Southampton claimed a routine 2-0 victory at home to West Bromwich Albion, who is still searching for its first win of the campaign.
Moussa Djenepo scored his first home goal for Southampton in the 41st minute and Oriol Romeu smacked home a sensational volley with just over 20 minutes remaining as the Saints kept their second clean sheet in two games.
Wolves also claimed three points thanks to Pedro Neto's 56th minute goal at home against a Fulham side still looking for its first point since returning to the top-flight.
James Rodriguez scored twice and added an assist as Everton beat Brighton 4-2 to keep its 100 percent winning record on Saturday.
Dominic Calvert-Lewin's 16th minute header put Everton ahead but Brighton equalized through Neal Maupay after a Jordan Pickford error.
Yerry Mina's header put Everton back in front on the stroke of halftime and James rounded off an excellent individual display with two second half goals.
Leeds United and Manchester City producing a thrilling 1-1 draw which lived up to expectations in terms of entertainment and suspect defending.
Raheem Sterling opened the scoring for the visitors in the 17th minute, but Rodrigo Moreno's first goal for Leeds in the 59th minute, following an error from City keeper Ederson, gave his side a point they more than deserved.
Ben Chilwell had a perfect Chelsea debut with the opening goal and an assist for Kurt Zouma in Chelsea's 4-0 win at home over Crystal Palace, which was rounded off by two penalties from Jorginho.
Saturday ended with Newcastle United winning 3-1 at home over Burnley thanks to an excellent display from winger Allan Saint-Maximin and two goals from Callum Wilson.