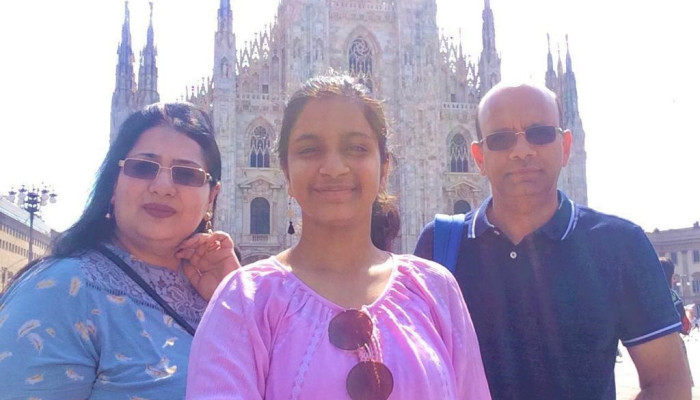 Muscat: A student from Indian School Al Ghubra has been confirmed the topper of her school’s class X board examination, after she submitted two of her papers for re-evaluation.

Nayaonika Vashishta’s overall score was revised to 98.2 per cent, after she felt she needed to re-evaluate her English and social studies papers, as she did not know where she’d lost marks in those two subjects.

A statement from the school said, “The improvement in her scores in English and social sciences, upon re-evaluation, made her take the lead from the previous two toppers of the school who scored 97.6 per cent. The management and staff of ISG are proud of Nayaonika for her outstanding performance and wish her many more superlative achievements.”

Nayaonika credits her outstanding achievement to the support her parents provide, as well as the willingness to enjoy learning, rather than studying just for the sake of achieving high marks at school.

“I study for maybe five hours a day, but I don’t do so continuously,” she said. “I take a break for about 10 minutes after every hour of study. What is most important, apart from going through the lessons yourself, is to pay attention while the concepts are being discussed in class. That is where most of my learning happens, and it makes it easier to understand them later.

“I also make it a point to play sports so that my mind does not get burned out by focusing on only studies,” added Nayaonika, who also represents her school’s tennis team, and recently scored 100 per cent marks at the International French Language Olympiad held this year, an achievement that saw her place first in the Middle East zonal division.

“I am not sure about what I wish to pursue next, but I would like to either study biotechnology or medicine,” she added. “I am happy to have become the school topper, but my celebrations took place when the results were first announced, as I did pretty well back then as well. Now, I am in class XI and it is important to focus on the way forward.”

Following her achievement, Nayaonika has asked others to not work blindly, but put in efforts in those areas where it actually matters. Hard work in the wrong areas, after all, can still lead to poor exam results, she feels, which in turn would demoralise a student who has spent many months preparing for his exams.

“Study what you want to study, do those subjects you wish to do, so that you find joy in doing them,” she advised. “That way, you look forward to studying and don’t treat it as something that is forced upon you. I have learned that patience, dedication, hard work and a love of the subjects you are studying will definitely help you find success.”