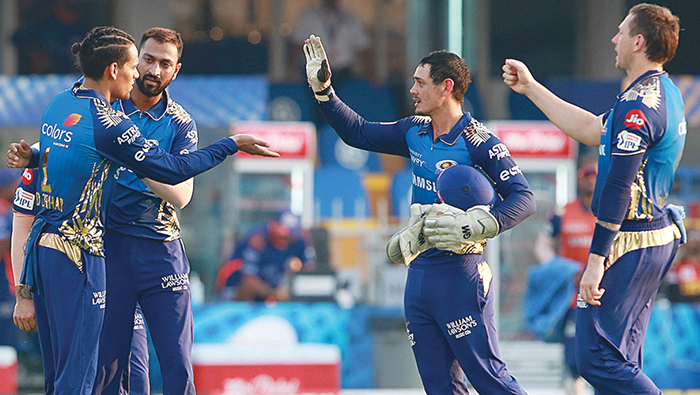 Sharjah: Mumbai Indians delivered an all-round performance against Sunrisers Hyderabad (SRH) to secure a 34-run victory over their opponents in the Indian Premier League (IPL) here on Sunday.

Mumbai Indians batters put a massive total of 208 runs on the board before bowlers sealed the win for the team. Mumbai Indians’ Jasprit Bumrah, James Pattinson, and Trent Boult all took two wickets each in the match.

Chasing a massive target of 209 runs, SRH got off to a decent start with openers David Warner and Jonny Bairstow smashing regular boundaries.

Both formed a 34-run partnership before Boult got hold of Bairstow (25) in the fifth over.

Manish Pandey then came out to bat and took the team over the 50-run mark, along with Warner.

Pandey played a knock of 30 runs from 19 balls before James Pattinson dismissed him in the 10th over.

Kane Williamson then joined Warner on the field and the duo took the team over the 100-run mark in the 11th over.

Williamson only scored three runs before getting out and Priyam Garg also failed to impress. Rahul Chahar caught a stunning catch to send Garg (8) back to the pavilion in the 15th over, bowled by Krunal Pandya.

In the next over, Pattinson handed Mumbai Indians with the much-needed breakthrough of Warner (60).

Abhishek Sharma and Abdul Samad then took the field but both of them were dismissed in the 19th over by Bumrah.

Mumbai Indians bowlers continued to dominate the match as the team registered their third win in this season of IPL.

Earlier, after opting to bat first, Mumbai had a bad start as skipper Rohit Sharma (6) was caught behind the stumps by Jonny Bairstow off Sandeep Sharma in the first over.

Suryakumar Yadav then joined Quinton de Kock in the middle and stitched a 42-run partnership.

Yadav played a 27-run knock off 18 balls including six fours before he was picked by Siddarth Kaul in the last over of the powerplay.

Ishan Kishan and de Kock then added some quick runs to the scoreboard and built a 78-run partnership for the third wicket.

The wicketkeeper-batsman scored 67 runs studded with fours sixes and as many boundaries.

Rashid Khan scalped Quinton in the 14th over.

In the next over, Sandeep Sharma bagged Kishan as Manish Pandey took a spectacular catch at long-on. Kishan scored 31 runs.