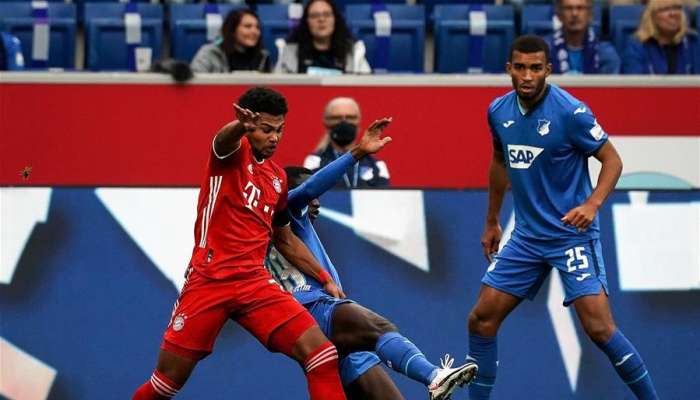 Berlin: Hoffenheim ended Bayern Munich's run of 32 unbeaten games after Andrej Kramaric was on target twice in a 4-1 win to ensure a perfect start to the season in the final match of the Bundesliga second round on Sunday.
Bayern started highly motivated in the encounter and took command while Hoffenheim kept 11 men behind the ball in the opening stages.
Bayern looked more active but wasn't able to create clear-cut chances against a well-positioned Hoffenheim defence.
Hoffenheim then grabbed the lead out of the blue with 16 minutes gone when Ermin Bicakcic headed home Dennis Geiger's corner kick to stun Hansi Flick's men.
Bayern responded well but still lacked in penetration to overcome Hoffenheim's defense. To make things worse, Hoffenheim doubled their advantage eight minutes later as Munas Dabbur capitalized on a misplaced clearance from Benjamin Pavard to beat goalkeeper Manuel Neuer into the far post corner.
The "TSG" should have added another goal to their lead but neither Christoph Baumgartner nor Kramaric were able to beat Neuer at the half hour mark.
Bayern increased the pace and eventually halved the deficit in the 36th minute when Joshua Kimmich curled the ball from 16 meters into the top right corner.
Kramaric had another chance on target in the closing stages of the first half but Neuer was on guard and kept his team in the game with a diving save.
After the restart, both sides traded attacks as Dabbur pulled over the target from a promising position before Joshua Zirkzee rattled the woodwork from a tight angle on the hour mark.
Bayern coach Hansi Flick added more quality with Leon Goretzka and Robert Lewandowski coming on the pitch but the goals were scored at the other end of the pitch as Ihlas Bebou set up for Kramaric, who kept his nerves to overcome Neuer from inside the box in the 77th minute.
Things went from bad to worse as Neuer felled Bebou inside the box to concede a penalty in the closing period. Kramaric stepped up to sew up the 4-1 victory on home soil.
With the result, Hoffenheim capture the top spot with two wins from two games whereas Bayern Munich slip to the 7th position after suffering their first loss in 2020.
"We kept Bayern at distance and finished off our fast breaks. Moreover, we fought as a team on the pitch. This is why we won today," Hoffenheim goalkeeper Oliver Baumann said.
Elsewhere, Freiburg and Wolfsburg shared the spoils following a 1-1 stalemate as Josip Brekalo cancelled out Nils Petersen's opener.