Study hard for your goals 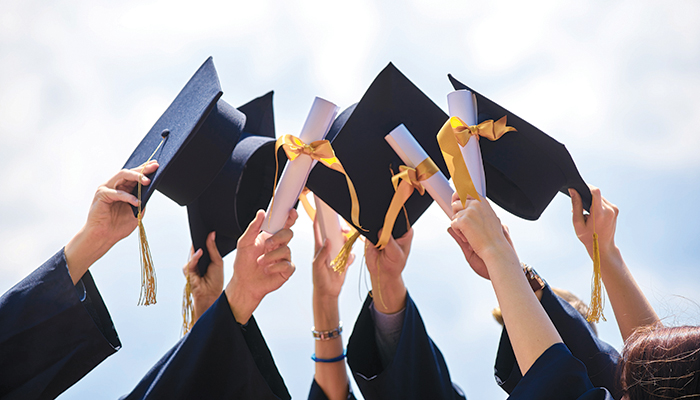 Muscat: Academic experts in Oman have asked students not to quit studying, as the revised minimum wage rulings will not affect them.

They’ve said that fresh graduates must look for jobs that provide them the right experience, with education playing a vital role in career growth. Their comments came after some students in the country considered dropping out of university to take up a job, as they feel they will be paid just the minimum wage of OMR325, even after obtaining professional qualifications, following the ministry’s decision to no longer equate salaries to degrees held by Omani employees.

Speaking to the Times of Oman, Hilal Al Badi, the deputy director of media relations at Sultan Qaboos University, said, “Students at any educational institution should not link a degree only to their jobs. It would be unfair for them to get a certificate just to earn a high salary from the very beginning. All students must realise that knowledge and science open up broader horizons that teach them life skills and increase their awareness.”

“There are skills that you learn not just from coming to university and opening your books, but also from the environment there, and by interacting with your fellow students, which enhances your personality and helps you develop the attitude to improve oneself even after you have left university.”

Jassim Al Balushi, the deputy head of the Department of Professional Development and Humanities at the College of Engineering at the National University of Science and Technology, said that fresh graduates and students have to shoulder some responsibility in convincing the company hiring them that they are worth more.

“Just because the minimum wage is now OMR325, does not mean you will get only that amount. Your starting salary could be OMR500 or 600, so don’t think negatively,” he said. “This decision was brought in to ensure everyone has an equal opportunity at getting jobs.”

He added, “Let us say there is an SME that wants to hire a skilled worker, and can offer about OMR500 to a fresh graduate. It does not mean only diploma holders can apply for this. If a graduate wants this job, he too can apply for it. It is better to take this job with this salary than just sit at home. If you believe you are worth more, then fight for it.”
“At the start of your career, it is more important to look at work experience and not just the salary you get,” said Al Balushi. “Once you have gained some experience and skill, then you can expect an increase in payment.”

Experts also said that wages linked with qualifications exist only in some of the Gulf countries. “Very few developed countries in the world follow this practice. So it is good that Oman will now follow wages based on skills and not on degrees,” an expert said.
Recently, US President Donald Trump signed an executive order June 26 that directs the federal government to take the emphasis off whether a job candidate has a college degree and instead assess an applicant’s job skills.

Shahswar Al Balushi, the head of Oman’s Tanfeedh Labour Labs, said the decision has been taken to increase competition among Omanis for jobs, and to encourage them sharpen their skills.

They also said that in private sector employees get rewarded based on their performance. “So it is very important to continue with their education which help them in improving their skills,” experts said.

Moaz, a student at Sultan Qaboos University, said he considered dropping out of university to take up a job, as he felt there was no point in earning a low salary after committing so many years to study.

“This is discouraging, frustrating, and dampens our motivation,” he said. “I don’t mind saying openly that I had thought of quitting studies and finding a job, because what is the point of studying for 12 years in school, getting good grades so that I can go to a good university, leave my hometown and come to Muscat, study for the last five years, during which I have faced many challenges, and then see a disappointing future in front of me? My family is waiting for me to support them financially, and they have overcome difficulties to try and help me find a good job with a well-paid salary.”

Adding to this, the mother of four Omani children admitted she was waiting for them to finish university and take up jobs that would help them financially support the family. She wondered, though, whether that would be possible if they were to earn only the minimum wage.

“I have three sons and a daughter, one is at university and the rest are in school,” she revealed, without wishing to be named.

“We provide them with clothes and accommodation from my husband’s pension, which is only OMR200 a month. We are working hard to make our children study and get good jobs.”

“How can my children support themselves and buy a car, a house, and pay for their wedding in the future, when they earn the same as those who don’t have good qualifications?” she added.

“The problem is that companies will use this as a pretext to determine an employee’s salary without considering his qualifications. There are many citizens who really need to find work and save for their future.”

Another student, enrolled in one of the country’s College of Applied Sciences, said, “This will have a negative impact on students enrolled in academic institutions in the country. I am concerned that everyone will be on the same salary of OMR325, which is meagre. All the hard work and financial problems people have faced to receive an education will be wasted.

“Many students will then leave school because they know there is no benefit from higher education, and they might go to other fields, but what is worse is that illiteracy and a lack of awareness might spread and affect parts of society,” she added.

However, Khalifa Al Hinai, a lawyer in the country, added that skilled workers would always receive more money.

“Competitive salaries are given to those who prove their capabilities,” he said. “Companies, especially in the private sector, do not look at the certificate their employees have, but pay more attention to skill development.”