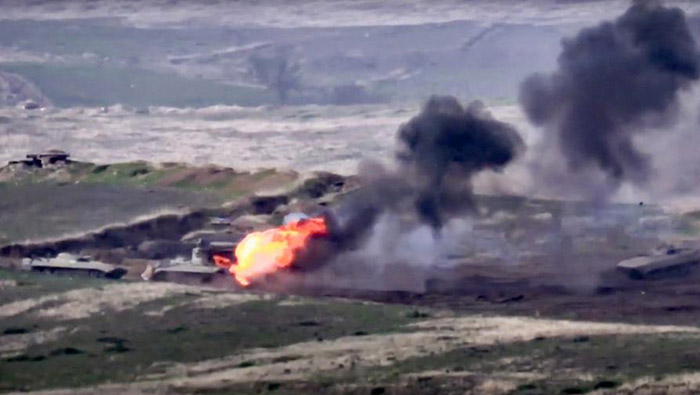 Nagorno-Karabakh: Armenia and Azerbaijan on Sunday accused each other of reigniting their decades-long conflict in the enclave of Nagorno-Karabakh after fresh violence erupted in the breakaway region.

The worst violence in the region since 2016 has raised the prospect of a new war in an area that has been simmering for decades.

At least 23 people -- both civilians and military -- have died in fighting that erupted on Sunday between Azerbaijani forces and Armenian rebels in the breakaway Nagorny Karabakh region, officials said.

Rebel officials said 16 of their own troops had been killed, and both Baku and Yerevan also reported civilian casualties, as did the International Committee of the Red Cross (ICRC).

Armenian Prime Minister Nikol Pashinyan announced in a televised address that Azerbaijan’s “authoritarian regime has once again declared war on the Armenian people.”

“We are on the brink of a full-scale war in the South Caucasus, which might have unpredictable consequences,” he added. “We are ready for this war.”

Pashinyan also spoke to Russia’s Vladimir Putin, with Putin expressing “serious concern” over the escalation. Russia maintains a military base in Armenia, and is seen as an ally to Yerevan. Both Armenia and Azerbaijan are former Soviet republics.

Turkey, meanwhile, is considered an ally of Azerbaijan, and has been vociferously criticizing the Armenian government.

In a statement posted on Twitter following a phone call with Azeri President Ilham Aliyev, Turkish President Tayyip Erdogan called on the Armenian people to stand against leaders who he said were “dragging them to catastrophe,” before adding that Ankara’s solidarity with Baku would “increasingly continue.”

War of weapons, war of words

“The entire responsibility for this lies with the military-political leadership of Azerbaijan,” insisted an Armenian Defense Ministry spokesperson.

“There are reports of dead and wounded among civilians and military servicemen,” Azerbaijan’s president said.By the afternoon, Azerbaijan claimed to have taken several villages in the region. “We have liberated six villages — five in Fizuli district and one in Jebrail district,” a ministry spokesman said.

“We call on both sides to exercise restraint, end the conflict immediately and resume negotiations,” he said, while offering Tehran’s support in working towards a resolution.

Authorities in Nagorno-Karabakh said the city of Stepanakert has been shelled and urged residents to get to safety. Numerous houses in villages have been destroyed, with injuries reported.

The breakaway region immediately declared “martial law and total military mobilization,” Karabakh’s president Araik Harutyunyan told an emergency parliament session. He said that those liable for military service had been called up for duty.

European Council President Charles Michel said the renewed violence was “of most serious concern” and called for an end to the fighting.

“An immediate return to negotiations, without preconditions, is the only way forward,” he wrote on Twitter.

“I call on both parties to the conflict to immediately cease all fighting and especially the shelling of villages and towns,” he said, according to the Foreign Ministry in Berlin.

Silvia Stöber, a journalist and expert on the Caucasus region, told DW that both sides had been preparing for an escalation like this for months.

She blamed the deteriorating economic situation in both countries for the flare-up but said international involvement probably played a role.

“The leadership of Azerbaijan may feel more motivated to escalate the whole situation” due to increased support from its ally Turkey, while the importing of Russian arms into Armenia means that it “looks like a conflict that [will go] further,” Stöber added.

During his noon blessing from St Peter’s Square, Pope Francis asked both sides to make “concrete gestures of goodwill and brotherhood” in order to resolve their differences without the use of force.

Turkey vowed complete support for Baku and called on Armenia to give up its “aggression.”

“We will support our Azerbaijani brothers with all our means in their fight to protect their territorial integrity,” Turkish Defence Minister Hulusi Akar said in a statement.

Why are there tensions?

Armenia and Azerbaijan have been involved in a dispute since the fall of the Soviet Union and had engaged in border conflicts earlier this year.

Violence first erupted in the region when ethnic Armenians seized Karabakh from Azerbaijan in the 1990s. An estimated 30,000 people were killed during the war.

A ceasefire, which was signed in 1994, largely put an end to the full-scale conflict, but peace talks mediated by France, Russia and the United States collapsed in 2010.

Azerbaijan has made repeated threats to take back the region by force. Although the region declared independence, it is heavily reliant on Armenian support and Armenia has stated that it would defend the territory militarily.