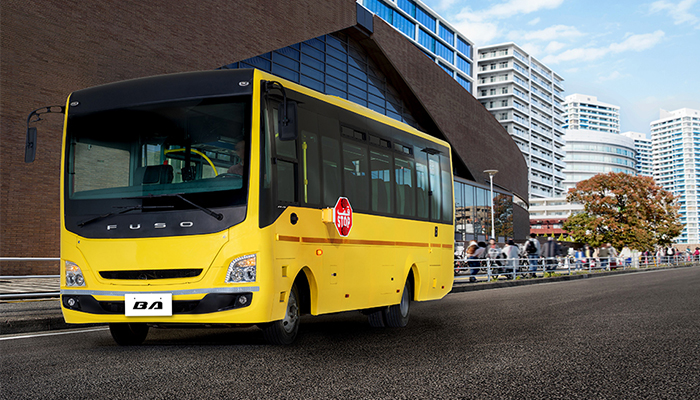 The BA bus, which is exported out of the Daimler India Commercial Vehicles (DICV) Oragadam plant as a BU vehicle, is now available to customers in the United Arab Emirates.

The Fuso BA bus is a further step in collaboration under the Daimler Trucks Asia partnership; three organisations within the Daimler group MFTBC, DICV, and EvoBus contributed to its realisation. The sales strategy for the new product was arranged by MFTBC and EvoBus, while DICV oversaw the design and production process. The product was developed in response to customer demand for vehicles able to transport over 30 passengers. Since pilot sales for the product began in December 2019, the number of BA buses produced for the UAE market has now crossed 100 units. Cumulative production of the BA bus is planned to reach 800 units by the end of the year 2023.

The Fuso BA bus, which is modelled on the BharatBenz Staff Bus, seats 36 passengers and is designed to match local demand for student and employee transportation. The application of an existing model allowed for the speedy commercialisation of the vehicle for a market with strong growth in urban development and industrialisation. The bus is installed with the economical 3.9 litres 4D37 4 cylinder engine that complies with Euro V emission norms. All seats are equipped with fire-retardant upholstery and 3 point seat belts for increased passenger safety. A roof hatch also enables emergency ventilation or evacuation, providing another level of assurance during commutes to match extreme summer conditions, the BA also comes standard with a high capacity air conditioner.
In addition to the new BA bus, the light-duty Rosa bus has also been available locally.

Being the largest market in the MENA region for MFTBC, the UAE has traditionally been a stronghold of the Fuso brand. In 2019, Fuso vehicles achieved a market share of over 53 BU trucks and buses from DICV’s Oragadam plant, as well as MFTBC’s Kawasaki and Toyama plants, are exported to the country. Sales are currently overseen by Al Habtoor Motors, which has been a FUSO general distributor in the region since 1983.