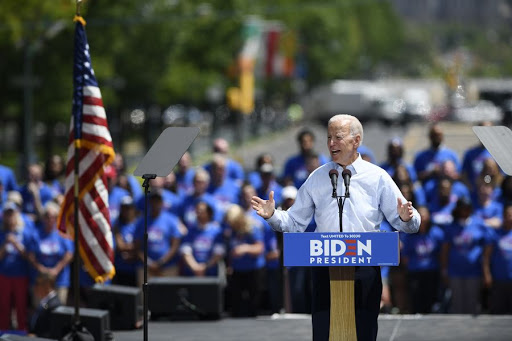 WASHINGTON: US Democratic presidential nominee Joe Biden on Sunday called on some decisive Republican senators to reject a vote on a new Supreme Court justice nominee before the election to replace late Justice Ruth Bader Ginsburg.

Delivering a speech in Philadelphia, Biden made the plea to "the handful of" Republican senators "who really will decide what happens" with the seat on the highest court vacated by Ginsburg's death on Friday.

Senate Majority Leader Mitch McConnell, a Kentucky Republican, said Friday the Senate will vote on a nominee picked by President Donald Trump, who told reporters the following day that he intended to announce a woman for the job next week.

"Don't vote to confirm anyone nominated under the circumstances President Trump and Senator McConnell have created," Biden said. "Don't go there. Hold your constitutional duty, your conscience. Let the people speak. Cool the flames that have been engulfing our country."

The former vice president said Friday that the sequence should be that "the voters should pick a President, and that President should select a successor to Justice Ginsburg," meaning the new justice should be selected by the one who wins the upcoming presidential election.

"To jam this nomination through the Senate is just an exercise in raw political power, and I don't believe the people of this nation will stand for it," Biden said in Philadelphia. "If Donald Trump wins the election, then the Senate should move on his selection and weigh the nominee he chooses fairly.