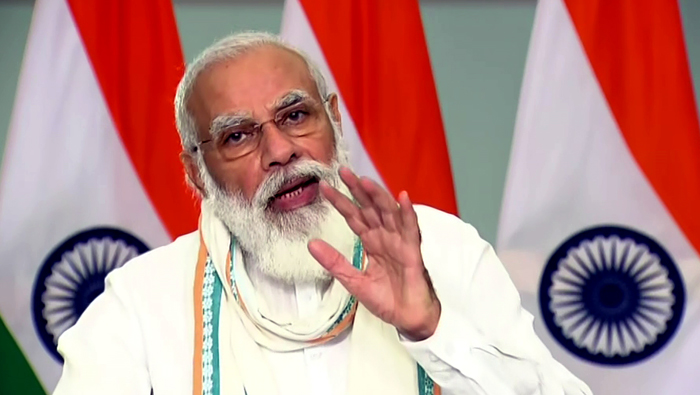 Speaking on the occasion, the Prime Minister said, today is an important day for expediting the infrastructure development and economic activities in Bihar. "History has witnessed that only that nation progresses, which invests heavily on infrastructure. Today, highways are being constructed at double the earlier speed. Investment on road construction has also been increased five times," said PM Modi.

He further said that Bihar is one of the biggest beneficiary of this infrastructure development. The projects in today's programme will also connect all major cities in the State.

"While making plans for road development in Bihar, the government has given due weightage to construction of bridges over the rivers. As a result, 17 river bridges are being made in Bihar. Due care is being given towards developing multi-modal transport system in the country," said PM Modi.

"The Government has announced to spend more than Rs 110 lakh crore on infrastructure in the coming four to five years. Out of this, projects worth more than Rs 19 lakh crore are allocated for the development of highways alone," he added.

The Prime Minister said Bihar is also benefiting from these efforts to expand the infrastructure related to road and connectivity. Under the Prime Ministers Package announced in 2015, over 3000 Kms of National Highway were proposed. In addition, under the Bharatmala Project, a six and a half kilometer national highway is being constructed.

On the occassion, Chief Minister Nitish Kumar said, apart from the PM's package also, the Centre is contributing to State's infrastructure.

He praised the Prime Minister's efforts for upliftment of the State. He also complimented the Centre for speedily completing the Highways and bridges in the State. He, however, requested for consideration of the need for a direct route between Buxar and Varanasi. The Chief Minister also pointed out the need for uniformity in NH width for smooth flow of traffic.

"The government is doing all that is possible to increase per capital income of the people in the State. The roads and bridges have been made part of the public grievance system. Large scale plantation of trees would be done along the National Highways in order to protect the environment," said CM Kumar.

The Prime Minister had declared a special package for significant infrastructure development of Bihar in the year 2015. This included 75 projects worth Rs 54,700 crore, of which 13 projects have been completed, work is undergoing at 38 and others are in DPR/Bidding/Sanction stage.

With the completion of these projects, all rivers in Bihar will have bridges conforming to 21st century specifications, and all major NHs will stand widened and strengthened. Under the PM's package, total number of bridges over river Ganga will become 17, with lane capacity of 62. This way, on an average, there will be a bridge over rivers in the State at every 25 kilometres.