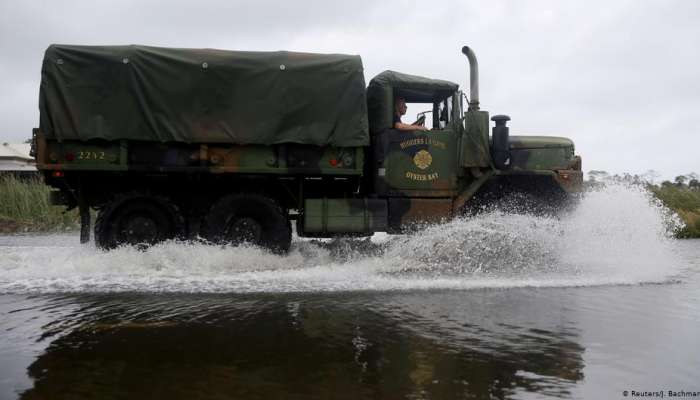 Alabama: Hurricane Sally touched down on the coast of Alabama in the US early on Wednesday morning local time, the National Hurricane Center (NHC) confirmed, killing at least one person and bringing with it torrential rains and a surge of ocean water that could cause devastating flooding in the days to come.

The Category 2 hurricane moved ashore at a slow 5 kilometres (3 miles) per hour, hitting the Gulf Coast with winds blowing 165 kilometres per hour.

The coastal areas of the states of Alabama, Mississippi, and Florida are particularly vulnerable to damage from the hurricane, the NHC said. Some isolated areas could receive nearly three feet (89 centimeters) of rain, according to the center.

The storm made landfall close to Gulf Shores, Alabama, and quickly moved over to Pensacola, Florida and Mobile, Alabama, metropolitan areas with around one million residents altogether. The storm cast boats onto land, peeled away roofs and left hundreds of thousands without power.

The death happened in Orange Beach, Alabama, according to Mayor Tony Kennon. At least 50 people in Orange Beach had been rescued from flooded homes and taken to shelters, said Kennon.

"We got a few people that we just haven't been able to get to because the water is so high,'' he said. "But they are safe in their homes. As soon as the water recedes, we will rescue them.''

Meanwhile, more than 550,000 homes and businesses in Alabama, Florida and Mississippi have lost power, according to the tracking site poweroutage.us.

By the afternoon, local authorities said that at least 377 people had been rescued from flooded areas. Additionally, authorities in Pensacola said 200 National Guard members would arrive on Thursday to help with rescue efforts. Officials also announced a three-day dusk-to-dawn curfew in Escambia County, which includes Pensacola.