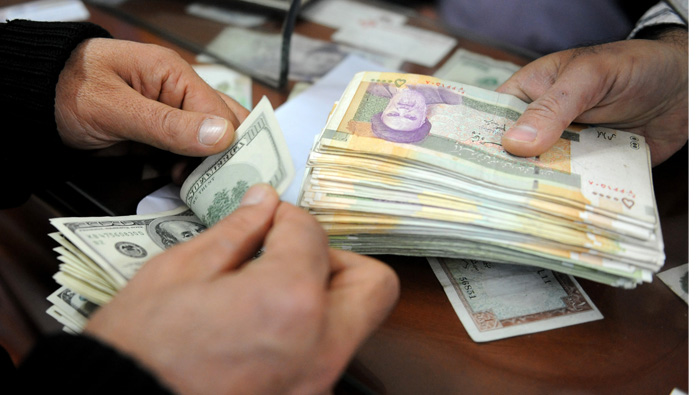 Tehran: Iran’s central bank is signaling that it will loosen its grip on the rial in an effort to end a dual-exchange rate system seen as an obstacle deterring foreign investment needed to rebuild the economy.
Policy makers, in a decision reported earlier this month, allowed commercial lenders to buy foreign currencies using rial rates set by the market rather than those dictated by the central bank. Akbar Komijani, a deputy governor, said the regulator will be “responsible for this market and will guide it.”
Authorities are “laying the foundation” for plans to unify the existing two rial-to-dollar exchange rates, said Kamal Seyedali, a former deputy governor. The move will lead to more cash entering the banking system rather than circulating through exchange houses, he said.
Luring overseas companies is central to Iran’s push to revive an economy that was cut off from global commerce by international sanctions imposed over its nuclear programme. Foreign direct investment rose to $4.5 billion in the first quarter of this year, according to fDi Intelligence, a division of the Financial Times. That’s still way below the government’s hopes of drawing $30 billion to $50 billion in foreign financial resources a year.
As ever tighter sanctions pushed Iran deeper into financial isolation and weakened the rial, the gap between the two existing exchange rates widened. Iranian lenders were compelled to stick to the official rate set each morning by the central bank.
Registered exchange houses, though, could buy and sell using the rate in the market, where the rial traded at 35,350 per dollar on Thursday, compared to 31,071 cited on the central bank’s website.
Key sanctions have now been lifted, following the successful diplomatic offensive unleashed by President Hassan Rouhani after he took office in 2013. The government has also worked to narrow the gap between the two rial rates, and has lowered inflation from a pre-Rouhani peak approaching 40 per cent to single digits in July.
Yet substantial barriers to investing in Iran remain, resulting in a growing mood among Iranians that the 2015 nuclear deal isn’t improving their lives. Obstacles include still-in-place United States curbs linked to Iran’s missile development and its support for groups classified as terrorist organizations in Washington and some European capitals, and the economic power of non-transparent state agencies. Another is the dual exchange rate.
Rouhani last month underscored the need for Iran to move toward unification. Days later, Central Bank governor Valiollah Seif, who had announced plans to adopt a single rate within months following the January implementation of the nuclear deal, said the policy would be in place before the end of the Iranian year in March 2017.
Simplification could help “attract foreign investors,” said Seyedali, who was at the central bank until January 2012 and looked after foreign-exchange affairs and is now chairman of the state-owned Export Guarantee Fund of Iran. “Bringing foreign currency inside Iran, changing it to rials using the official rate and then returning their revenue at the market rate can lead to diminished profit,” he said.
For local businesses, using exchange houses “is not the most reliable medium and leads to higher costs,” said Mousa Ghaninejad, an economist and adviser to Iran’s chamber of commerce.
A single rate will also “cut down on corruption by increasing transparency,” said Amir Naghshineh-Pour, managing director of Vistar Business Monitor, a Dubai-based consulting firm that focuses on Iran. There will be “less confusion and more confidence for foreign companies planning to enter the Iranian market.”

His Majesty sends cable of condolences