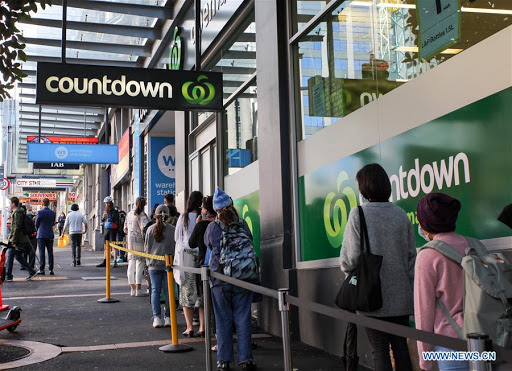 HONG KONG: Asia-Pacific countries are still fighting against the COVID-19 pandemic with an alarming resurgence of infections, as New Zealand resumed strict lockdown after announcing community transmission from unknown source after 102 days.

One new case in managed isolation and quarantine facilities was reported on Wednesday, with four more probable cases in the community related to Tuesday's four cases, according to the Ministry of Health.

There have been 1,225 confirmed cases to date, it said, adding there are currently 22 active cases, with five people having recovered over the past 24 hours.

As the hardest-hit area in Asia-Pacific, India's total infections rose to 2,329,638 and death toll crossed the 46,000 mark, reaching 46,091, according to data released by the federal health ministry.

Over the past 24 hours, as many as 60,963 new cases were recorded across the country, while 834 deaths due to the virus were registered. There are a total of 643,948 active cases in India presently, and 1,639,599 people have been cured and discharged from hospitals.

In the Philippines, the number of total infections surged to 143,749 after the Department of Health (DOH) reported 4,444 new daily cases.

The DOH said that the number of recoveries further rose to 68,997 after it reported 636 more patients having survived the disease.

The death toll also increased to 2,404 after 93 more patients have succumbed to the viral disease, the DOH added.

According to the ministry, 2,088 more people were discharged from hospitals, bringing the total number of recovered patients to 85,798.

Within the past 24 hours, 418 tests were conducted, and 76 were positive cases in 10 provinces of Afghanistan's 34 provinces, the ministry said in a statement.

Up to 1,345 deaths have been recorded since the outbreak of the pandemic in the country in February, an increase of 10 within the past 24 hours.

South Korea reported 54 more cases as of midnight Wednesday compared to 24 hours ago, raising the total number of infections to 14,714.

The daily caseload stayed above 50 for 17 days since July 26 due to the continued small cluster infections and imported cases.

No more death was reported, leaving the death toll at 305. The total fatality rate stood at 2.07 percent.

The Australian state of Victoria recorded another 21 deaths and 410 new infections, again breaking the record for the country's deadliest day.

Victorian Premier Daniel Andrews said all those who died were in their 70s or older, and 16 of the deaths were linked to the state's aged care system.

The total number of active cases in Victoria stood at 7,877, with 2,961 not linked to any known source.