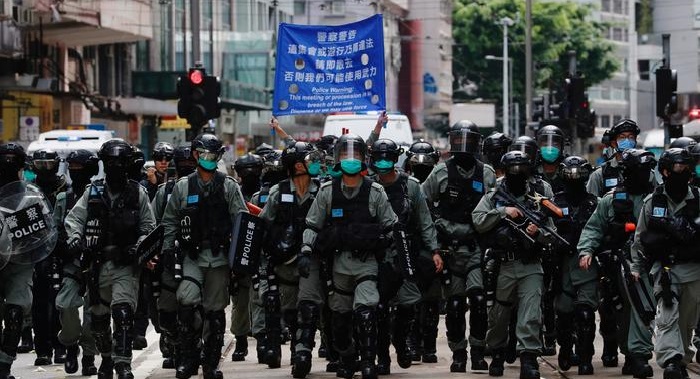 Hong Kong police made the first arrests under the new national security law, and fired water cannons and pepper spray at protesters on Wednesday — the first full day the sweeping measures went into effect.

Police said that they arrested 180 people for unlawful assembly, violating the security law, obstructing police and possessing weapons. One metro station was also closed, as thousands gathered downtown for the demonstration to mark the 23rd anniversary of the former British colony's handover to China.

Police, who earlier banned the protest, cited the new law when confronting protesters who had gathered at Causeway Bay, a popular shopping district and the site of several protests prior to Wednesday's demonstration.

"You are displaying flags or banners/chanting slogans/or conducting yourselves with intent such as secession or subversion, which may constitute offenses under the national security law," read an official message displayed on a purple banner.

The first person to be arrested under the new law was holding a flag that said "Hong Kong Independence," a violation of the security law, according to a police statement on Twitter.

Later on, a woman was arrested for carrying a sign with a similar message that displayed the British flag. "#HKpolice will take resolute enforcement action in accordance with #NSL," police tweeted.

Police also said that an officer had been stabbed in the arm by protesters, and posted a photo of a person with a wounded arm. "While the bystanders offered no helping hand, suspects fled," the department wrote.

A ban on calls for independence

Under the law, which took effect on Tuesday 11pm local time (3pm GMT), any person taking part in secessionist activities such as shouting slogans or holding up banners and flags calling for the city's independence is in violation of the law, regardless of whether violence was used.

The law can target some of the actions seen at anti-government protests last year, including attacks on government offices and police stations, damage to subway stations, and the shutdown of the city's international airport. Acts of vandalism against government facilities or public transit can also be prosecuted as subversion or terrorism. The new security law will not, however, be applied retroactively, a senior Chinese official said Wednesday.

Also on Wednesday, a Chinese government official said that those suspected of violating the law could be investigated in the mainland. Beijing's new office in Hong Kong abides by Chinese law, and Hong Kong's legal system cannot be expected to implement the laws of the mainland, said Zhang Xiaoming, Executive Deputy Director of the Hong Kong and Macau Affairs Office.

"This law is a birthday gift to [Hong Kong] and will show its precious value in the future," said Zhang.