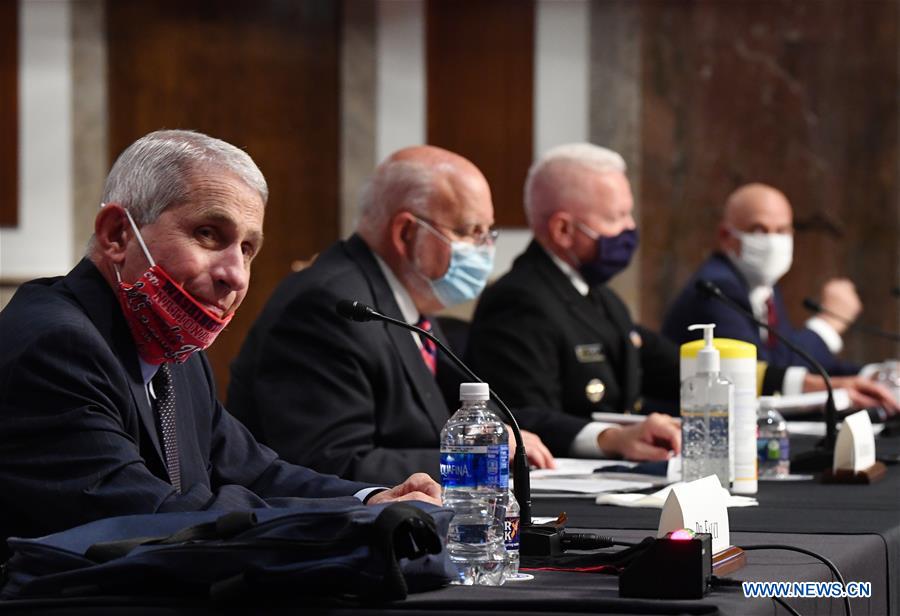 WASHINGTON: Anthony Fauci, the US government's top infectious-diseases expert, said on Tuesday the country is "not in total control" of the coronavirus pandemic, giving a dire warning that COVID-19 cases in the United States could go up to 100,000 per day if the current trend "does not turn around."

"I can't make an accurate prediction, but it's going to be very disturbing," Fauci told senators in a hearing held by the Senate Health, Education, Labor and Pensions Committee.

Fauci, director of the National Institute of Allergy and Infectious Diseases, said that the country is "going in the wrong direction" as the number of COVID-19 cases increases across the nation.

"We are now having 40-plus thousand new cases a day. I would not be surprised if we go up to 100,000 a day if this does not turn around. And so I am very concerned," he said.

Fauci stressed that he could not make an estimation on deaths as those would need to be modeled.

His comments came as the number of new cases reported each day in the United States is outpacing that of April, when the pandemic rocked Washington state and other parts of the country, especially the New York City area.

More than 2.6 million COVID-19 cases have been reported in the country with the fatalities surpassing 127,000 as of Tuesday afternoon, according to a tally by Johns Hopkins University.

Fauci warned that some states are "skipping over" checkpoints in the federal reopening guidelines and that this is leading to new hotspots in states like Texas, Florida and Arizona.

According to Fauci, about 50 percent of all new cases are coming from four states: Florida, California, Texas and Arizona.

The outbreaks in various parts of the country put "the entire country at risk" and "clearly we don't have this under control," Fauci added.

He said that even states and localities that "did it right" regarding reopening still have individuals who engaged in an "all or none phenomenon", disregarding social-distancing measures and face mask usage while out socially.

"In this viral surge we are seeing more tests being done but we are also seeing a higher percentage of those tests be positive. This indicates more infection is the issue - not more testing," Robert Schooley, a professor of medicine with the Division of Infectious Diseases and Global Public Health at the University of California, San Diego, told Xinhua in an interview.

"As the epidemic surges, hospitals and ICUs are, nonetheless, being stretched to capacity in Arizona, Texas, Alabama and elsewhere. The number of deaths will rise if the epidemic is not brought into check," Schooley said.

"Behavior in real time is what drives the future," he noted.