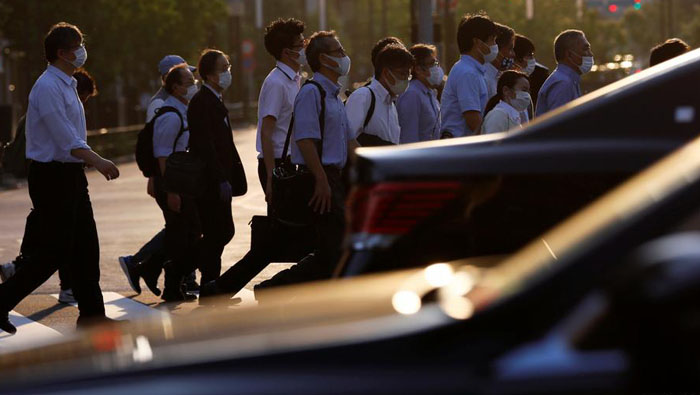 Tokyo: An uptick in the number of infections of the novel coronavirus in Tokyo is causing confusion and concern among health officials charged with bringing the outbreak under control, with authorities here warning that rates are likely to increase far more rapidly later in the year.
Heightening that concern is the failure of the outbreak to decline or level off now the warmer summer months have arrived. Epidemiologists had hoped for some respite from an illness that has so far infected 18,631 people across Japan and caused 985 fatalities, but numbers are still trending upwards.
Fifty-eight cases were reported in the capital on Monday, following 60 the previous day and lifting the weekly average to 51.8. The 60 cases reported on Sunday is the highest single-day figure since 87 cases on May 4. In total, 6,172 residents of Tokyo have been diagnosed with the virus. Nationwide, there were 110 additional cases.
Cluster at hostess club
The new cases include a cluster linked to a hostess club in the city of Utsunomiya, north of Tokyo, with the eight cases among staff in their late teens to early 30s traced back to a customer who had visited the club earlier in the month.
Despite the gradual rise in infections, the Japanese government said on Monday that it has no plans to reintroduce the state of emergency that was lifted for Tokyo on May 25 or to impose a ban on travelling across prefectural borders.
Yasutoshi Nishimura, the minister in charge of coordinating the government's response to the crisis, said on Sunday that there is "no need" to reintroduce a state of emergency. He said that health authorities are analysing data provided by each of the nation's prefectures to trace links between new outbreaks and to identify group infections.
Nishimura also sought to reassure the public by declaring that the nation's medical system is "more than able” to handle anyone infected with the virus.
Kazuhiro Tateda, president of the Japan Association of Infectious Diseases and a member of the committee set up by the government to combat the spread of the virus, is less convinced.
"The situation is worrying because we do not precisely understand why this is happening," he told DW. "We do know that most of these infections are related to the nightlife districts of Tokyo, places such as Shinjuku, Kabukicho or Roppongi, but around half of the total new cases are not linked to the bars, clubs and karaoke boxes."
Safety guidelines
Operators of venues in Tokyo have been issued with guidelines on safeguarding the well-being of their employees, recommending that they wear masks, keep a safe distance from their customers and to regularly wash their hands. For an industry that relies on intimacy, however, it is almost impossible to ensure the rules are followed.
Japan is ramping up testing, Tateda said, and he says experts have proposed focusing their efforts on nightlife districts to identify people who are carrying the virus, perhaps unwittingly, and then tracing their customers and visitors to the area.
Yoko Tsukamoto, a professor of infection control at the Health Sciences University of Hokkaido, is also concerned about a sudden explosion in cases before an effective cure can be developed.
"We can trace this latest increase back to the easing of travel restrictions on June 19, when people were permitted to go to different parts of the country for leisure," she told DW. "We have seen the impact of lifting the restrictions in the US and while it has not been so bad here, there has certainly been an increase in cases. In truth, it makes me nervous," she said, pointing to a cluster of infections in a retirement home in Hokkaido.
"I hope this is not the beginning of a second wave and I hope we can stop these clusters cropping up, but I do worry that the illness is being spread by young people who have no visible symptoms and believe they are fine, but are passing it on to friends and relatives," she said, adding that an infection that has limited impact on a person in their 20s can be fatal to a relative in their 80s.
Danger ahead
Tateda also expressed dismay that infections had not tailed off with the arrival of the warmer Japanese summer months.
"We are not sure why numbers have not fallen as our understanding is that higher temperatures and ultraviolet radiation from the sun would have an impact," he said. "But it is still possible that heat and radiation are indeed having an impact but that we are still seeing an increase."
"If that is correct, that is a cause for concern because temperatures will begin to drop in the late autumn and the winter and we may see a second wave of infections then," he said.
"If that second wave also coincides with the influenza season, that will be very dangerous and we will have to be very careful," he said.