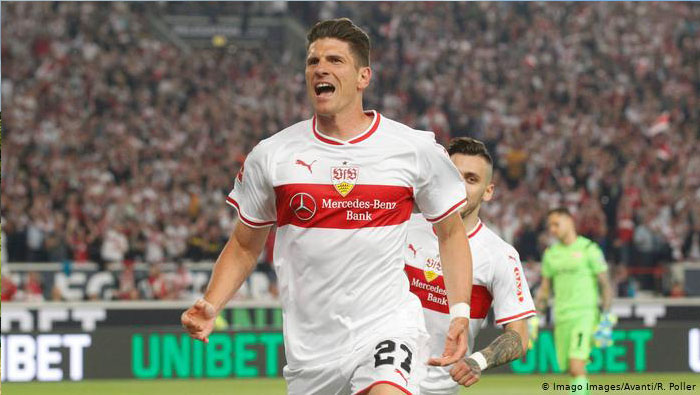 Berlin: An outstretched leg to guide the ball slowly into the back of the net was a fitting way for Mario Gomez to score the last goal of his professional career. The 34-year-old striker couldn't help Stuttgart to a final day win but he had helped them to return to the Bundesliga in his final season, his parting wish for the club that made him.
The end of Gomez's career is the end of an era for the out-and-out German center forward. Other than Miroslav Klose, the modern era of German football has not been littered with prolific striking talent. Gomez, the son of a Spanish father and a German mother, was a tall, strong forward who was there just to score. The game is faster now and more is expected from players in each position, but there will always be something magical about players who just scored goals. Mario Gomez was one of those.
Penalty-box poacher
Gomez's career took off when he scored 14 goals to unexpectedly help Stuttgart to the 2007 Bundesliga title. Two more seasons of big goal tallies (19 and 24 respectively) and a move to Bayern Munich was inevitable.
In his four seasons in Bavaria, he never failed to score double-figures in the league. When Borussia Dortmund won the title in 2011, Gomez scored 28 goals for Bayern. The following year, Dortmund won again. Gomez delivered again, scoring 26. His role in the treble winning year was less prominent, as he became more of a penalty-box striker, but in his final game for Bayern, the German Cup final no less, Gomez fittingly scored a brace against Stuttgart to secure the third trophy.
When he signed for Fiorentina, thousands filled the stands. A serious injury denied him success in Italy and a spot at the 2014 World Cup. Between 2008 and 2018, the tournament in Brazil was the only one Gomez wasn't in the Germany squad. For the striker who finished his international career with 78 caps and 31 goals, it was a cruel twist of fate that that was the only tournament Germany won.
Throughout his career, Gomez had shown that, whatever the style of play, there is always value in having someone in the squad capable of putting the ball in the back of the net. Throughout his Germany career he had been as reliable as his goals. Not being involved in the glory in 2014 almost seemed unfair for a player who had given so much to Germany teams that weren't quite perfect when they needed to be.