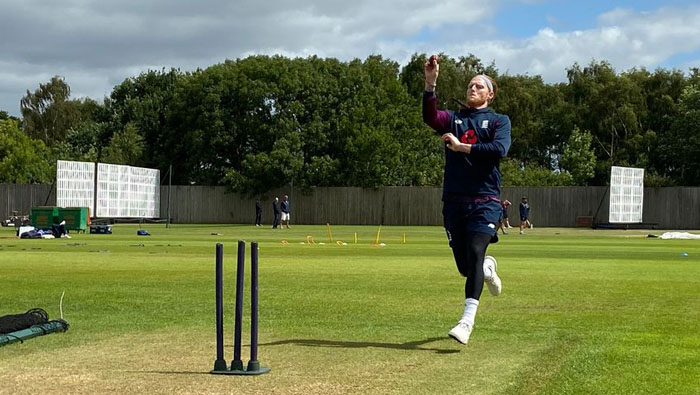 London: England all-rounder Ben Stokes says he hasn't "dived into the whole idea" of captaincy yet, but will consider it a "huge honour" if he gets to lead England for a Test match.
Captain Joe Root is awaiting the birth of his second child, and so is expected to miss at least one Test during England's upcoming three-match series against West Indies. As vice-captain, Ben Stokes will take over in the event of Root missing a Test, though he is waiting on absolute confirmation before throwing himself into the role.
"I haven't really dived into it yet," Stokes said during a virtual press conference. "For me, at the moment it's all about preparing and getting to the level I want to be two to three days out before the first Test match starts. But I know, because we've got such a big squad at the moment that there's so many players that you've got to keep your eye on. Because we're in split training at the moment it's tough to be able to see everybody.
"I haven't fully dived into the whole idea yet, on purpose. I'm just waiting for the right time to do that. It's still a long way off, so when it gets a little bit closer and it's 100 per cent confirmed I will be in charge, I'm sure the mindset will change."
The World Cup final hero was also confident that he had learned plenty over the years from Root, and former England captain Alastair Cook, that he would be prepared to face whatever the West Indies could throw at him during the Test. Beyond his own experience, Stokes spoke of how he was also planning to utilise the knowledge of the rest of his side.
"I've been a senior player in the team since 2016, under Cooky [Alastair Cook], and obviously since Joe [Root]'s been in charge. So being able to learn from Alastair Cook and being able to learn from Rooty in terms of different situations throughout the game I think has rubbed off on me and will put me in good stead for all the different situations a Test match can throw at you.
"But at the same time, we've got some really, really experienced guys out on the field who I can use. We've got Jimmy and Broady who have got ample Test matches and wickets between them, and there's so many people you can throw ideas off. I like to think I'll be quite an open captain and wouldn't think that my way is the only way. Because necessarily I don't think that is the best way to operate. There's 11 guys out on the field so why not get 10 other opinions on something you're thinking about."
Stokes is also excited to have the chance to return to action and is grateful for the cautious manner in which cricket is returning to ensure the safety of all involved.
"When it got confirmed that they were coming out, it was very exciting to think about that we were going to be back on the field playing some competitive cricket again. So a huge credit to the West Indies players and the cricket board for pushing the series through. Because everyone wanted to see cricket back on the field. But I think it's also been done in the right way, all the safety checks have been made. We know that we're going to go out on the field in a very safe environment. Whilst we've been down in Hampshire for the first week everybody's really abided by the rules we've been told to stick to."
Counter to some suggestions, the star all-rounder believes the lack of a crowd will not pose a problem in getting players motivated.
"I don't think its a struggle to get yourself up playing for England, I think what the crowd does is, it gives you an extra bit of energy. Even though there's not going to be any crowds here, lads won't struggle to get up for it. I think it's a fine margin between getting up for it and the crowd giving you a bit more. That's what I think the crowd gives you.
"But the fact there's not going to be a crowd there, I don't think that we can use that as an excuse for our levels of intensity, because we're walking out on to the field representing England, which thousands of people would give their right arm to be able to do what we do every day. And whether or not that's in front of a full house or no crowd like we're going to be playing in, it shouldn't matter. You've got te three lions on your chest. It is a completely different situation that we're used to. But I think once we get out there and realise we're in a Test match representing England, I think everybody will be fine."