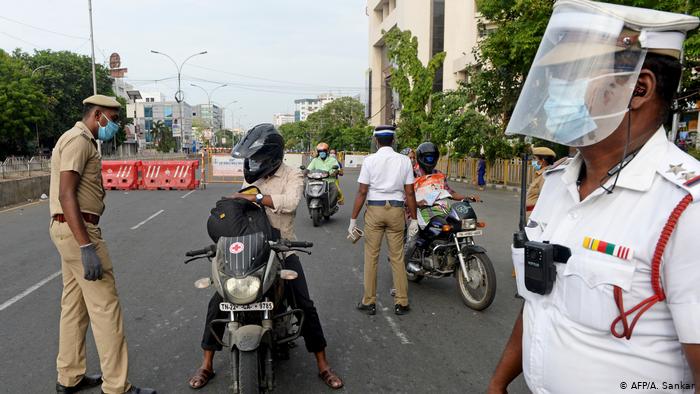 The deaths of a father and son from alleged police brutality have sparked outrage and a debate on custodial deaths in India, with many drawing parallels with the killing of George Floyd in the United States.

Outrage in India over police custody deaths of two men

J. Jayaraj, 58, and Benicks Immanuel, 31, were arrested by police on June 19 and accused of keeping their mobile accessories store open past permitted hours in the southern Indian state of Tamil Nadu, which has reimposed a lockdown to curb the spread of coronavirus.

They died in hospital a few days later, officials said, with their family alleging that they were severely abused by police and had suffered rectal bleeding.

Two policemen involved in the alleged torture were suspended, the state's Chief Minister Edappadi K Palaniswami said. On June 28, Palaniswami said that his government had appealed to the Madras High Court to transfer the case to the Central Bureau of Investigation (CBI), India's federal investigative agency.

The deaths in the small town of Sathankulam caused massive uproar on social media and shops in Tamil Nadu were shut on Wednesday in protest. According to radio jockey Suchitra Karthik Kumar, the private parts of Benicks and Jayaraj were smashed with sticks and then shoved inside their bodies.

Benicks' lawyer, S Manimaran, has alleged that his flesh was "ripped off" with incessant beating. "We had laid down a blanket in the seat of the car when we went to pick them up, Benicks had lost a lot of flesh on his back. He was a well-built man. The car driver was in tears seeing their state. The spot where Benicks sat was covered with blood, the place where Jayaraj was sitting was also all blood. The blankets are still with us. They were beaten to death," said Manimaran.

State politician, social activist and lawyer Jignesh Mevani wrote that the "George Floyds of India are far too many."

"Will Indians march on streets in thousands like in America?" he tweeted.

Rahul Gandhi, a leader of the opposition Congress party, described it as a "tragedy when our protectors turn into oppressors."

The state government has announced a financial compensation to the family of Jayaraj and Benicks.

While the government promises swift investigation and justice, the magistrate appointed by the Madras High Court to investigate the alleged custodial deaths has written to the court saying that the police had destroyed evidence, did not cooperate in the investigation, and had tried to intimidate the judicial team.

The incident has brought to the fore the question of custodial deaths in India. According to the National Human Rights Commission, 3,146 people died in police and judicial custody in 2017-18. "Custodial violence and torture is so rampant in India that it has become almost routine," it said in a report.

"It represents the worst form of excesses by public servants entrusted with the duty of law enforcement." Convictions in such cases are extremely rare, according to activists.

The police have also come under fire in India in recent months for using force to dispel protests and beat up people for flouting the lockdown measures. In March, Shashi Tharoor, an opposition lawmaker, had called on Prime Minister Narendra Modi to stop police from using violent force to enforce the lockdown.