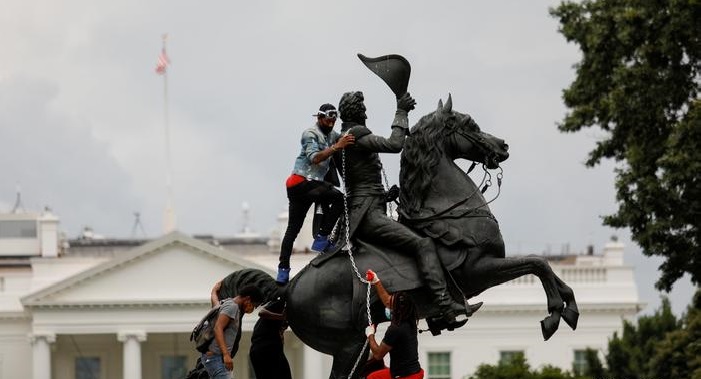 US President Donald Trump on Friday signed an executive order protecting monuments, memorials and statues amid fresh scrutiny of historical figures with racist legacies. The president also scrapped a planned weekend visit to his golf resort in New Jersey, saying he would stay back in Washington "to make sure LAW & ORDER is enforced."

The executive order says the federal government will prosecute "to the fullest extent" of the law any person or group that damages or desecrates a monument,
memorial or statue. Trump also threatened to withhold federal funding to states and law enforcement agencies that fail to protect monuments.

"MANY people in custody, with many others being sought for vandalization of Federal Property in Lafayette Park. 10 year prison sentences," he said.

Announcing his plan to skip a weekend at his New Jersey home, he said: "The arsonists, anarchists, looters, and agitators have been largely stopped...I am doing what is necessary to keep our communities safe — and these people will be brought to Justice!"

The cancellation of his weekend trip came hours before he was due to board Air Force One, amid rising concerns over a surge in coronavirus cases. A presidential spokesperson said the cancellation had nothing to do with the rising infection rates in the state.

Earlier this week, Trump had promised strong action against anyone who damages or desecrated monuments on federal property. His announcement came after a group of protesters tried to tear down the statue of former President Andrew Jackson, a slave owner, near the White House.

Trump had authorized government officials to arrest the people involved in bringing down statues, adding that the measure could be applied retroactively.

"I have authorized the Federal Government to arrest anyone who vandalizes or destroys any monument, statue, or other such Federal property in the U.S. with up to 10 years in prison, per the Veteran's Memorial Preservation Act, or such other laws that may be pertinent," he tweeted.

Cities across the US have been facing civil unrest following the police killing of unarmed Black man George Floyd. In some cities, protesters have targeted statues and memorials of Confederate leaders.