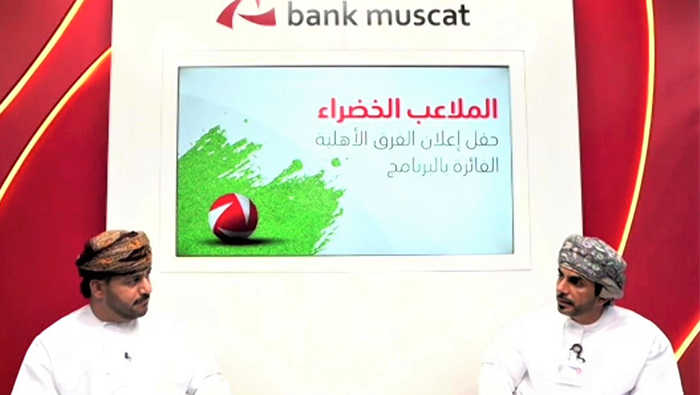 Muscat: Reinforcing its leadership role in the field of CSR and support for Omani youth and sports teams, Bank Muscat, the flagship financial services provider in the Sultanate, has announced the names of the 15 winners of its Green Sports programme in 2020.
The bank live-streamed for the first time, the announcement function at its headquarters in Airport Heights on June 24. The event was well followed by the general public on the bank's social media accounts on YouTube and Twitter. The much-awaited list of new beneficiaries was announced after evaluating a large number of teams from different governorates across the Sultanate. The total number of Green Sports beneficiaries has now reached 123 sports teams across the country since its inception in 2012.
The bank’s landmark Green Sports programme has been supporting Omani youth and strengthening the role of sports teams in the various governorates and states of the Sultanate over the years. The Green Sports Programme saw excellent participation by sports teams from across the Sultanate confirming the success of the bank’s flagship CSR programme. The programme has been extremely popular among sports teams in Oman. The 15 winners for this year will benefit from the bank’s support to provide natural grass, lighting systems or water desalination equipment. The bank attaches great importance to supporting Omani youth and will continue to implement various sustainable programmes to support the community and enhance the bank’s flagship role in CSR.
The 2020 winning teams include Al Etihad Al Gharbi from Nizwa, Al Mazahith from Rustaq, Saih Al Snadah from JalanBani Bu Ali, Al Shabab from Ibri, Al Hussn from Rustaq, Al Ansar from Dima W’ Al Tayeen and Al Nasr from Al Khabourah. These teams will be provided with floodlighting for their sports fields. The Al Taawun team from Al Musannah will be provided with support for the installation of a water-desalination system.
Teams which will benefit from support to plant natural grass in their sports fields include Qalat Al Awamer from Izki, Al Waha from Wadi Bani Khalid, Al Rayed from Rustaq, Al Qabas from Jalan Bani Bu Ali, Al Arabi from Wadi Bani Khalid, Al Qadisiya from Samad Al Shan and Al Mahab from Saham.
The registration process for the Greens Sports programme was completed in December 2019, which showed an excellent turnout of youth teams. As many as 77 teams from various governorates in the Sultanate registered for the support this year. The Green Sports Committee then visited all the eligible teams to inspect their readiness and capacity to implement the programme, to finalise the winning teams. It must also be noted that a number of new Green Sports fields are expected to be inaugurated in the coming months from amongst the beneficiaries of previous years.