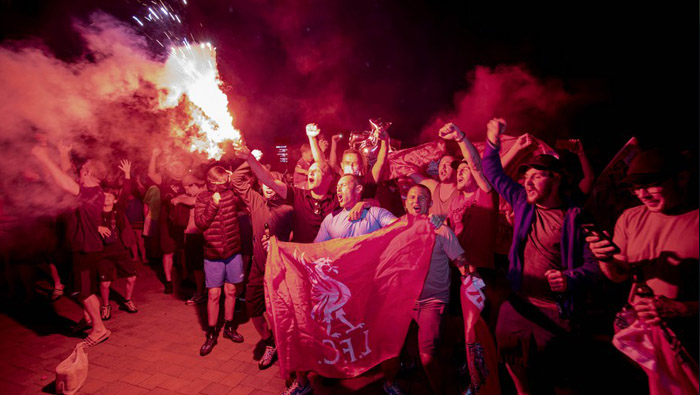 London: Liverpool mayor Joe Anderson is considering imposing a curfew on Saturday night as tens of thousands of Liverpool FC fans spent a second day celebrating their first Premier League title.
Local media reported Anderson was holding urgent talks with city Chief Constable Andy Cook over people's concerns and a failure to observe social distancing had presented a major problem.
Anderson pleaded on social media for fans to head home.
He said: "There is clearly too many people intoxicated and causing anti-social behavior around the City Centre."
In his message to fans, he said: "Please I urge you to leave the City Centre now it is not safe. Police will take action against people not obeying rules. COVID-19 is still a real risk."
His plea was accompanied by a photo taken from his City Hall office at the Cunard Building showing crowds at the waterfront Pier Head area.
The message was reinforced by Liverpool regional Metro Mayor Steve Rotherham.
He said: "Nobody is more made up than me to see LFC champions again, but this is dangerous.
"We're not saying this to be party poopers but hundreds of people have already died in our region because of coronavirus. Until it's safe for us to come together, please celebrate at home."
Liverpool City Council also posted a message to fans saying: "Celebrations are continuing into the second evening in Liverpool - but please remember that #COVID-19 still poses a threat. It's vital that you keep your distance from others who are not in your household."
Liverpool was crowned League champions on Thursday, ending a 30-year wait for the top accolade in English football.