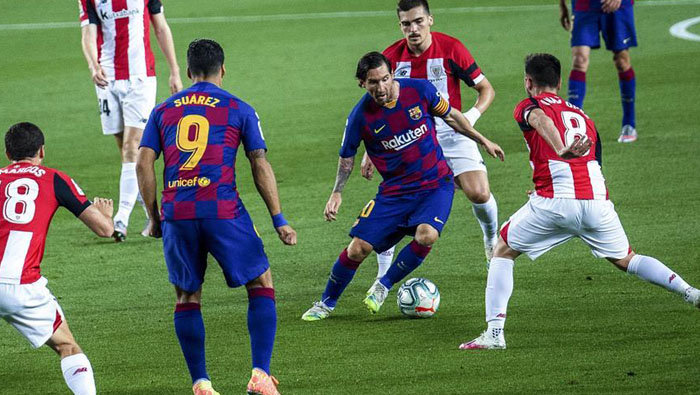 Madrid: FC Barcelona returned to the top of La Liga after a narrow 1-0 win at home to Athletic Bilbao on Tuesday night, thanks to a 71st minute goal from Ivan Rakitic.
Rakitic, who came into the game as a second half substitute, scored the winner after an assist from Lionel Messi, who was lucky to still be on the pitch after an incident two minutes earlier when he caught Athletic defender Yeray Alvarez with a full set of studs on his ankle.
The first half was a very even affair with few chances, although Athletic's Inaki Williams, playing his 150th consecutive game, could have done better than hit the side netting on a break.
Barca controlled the second half better, but created few chances until Rakitic's goal.
Real Madrid will return to the top of the table if they beat Mallorca on Wednesday night.
Elsewhere on the match day, Bruno Gonzalez's 15th minute own goal after an impressive piece of skill from Atletico Madrid's Marcos Llorente was enough to give Atletico a 1-0 win away to Levante which strengthens their place in third place in the standings.
Getafe remain without a win since the restart after a 1-1 draw in a very hot Nuevo Zorrilla Stadium against Real Valladolid.
Former Valladolid striker Jaime Mata put Getafe in front in the 41st minute, but Enes Unal gave his side another point to edge them closer to safety from the penalty spot deep into first-half injury time.
Monday saw Villarreal and Sevilla draw 2-2 in a La Liga game in which Villarreal's Bruno Soriano returned after three years out through injury.