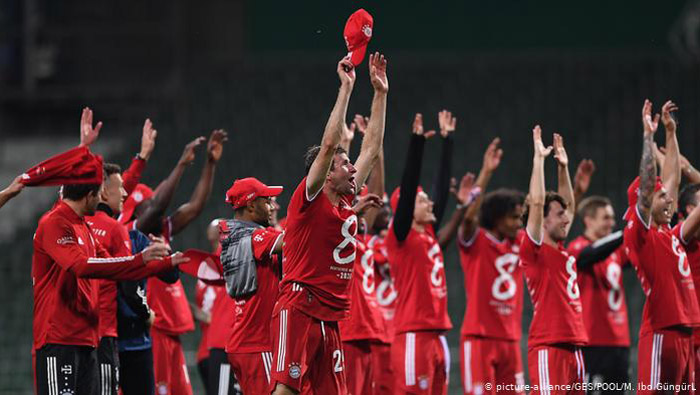 Berlin: Robert Lewandowski's 31st goal of the season against Werder Bremen secured Bayern Munich an eighth straight title in Germany's top flight with two rounds to spare on Tuesday.
The "Green-Whites" were in need of vital points in the relegation battle and they knew that a draw would at least lift them on the playoff spot. Hence, Bremen started highly motivated and created the first clear-cut chance of the game when Maximilian Eggestein missed the target just wide.
Bayern combined their way through the midfield but still, they lacked accuracy in front of the target. Bremen also staged a well-positioned defence and gave the German champions a hard time.
However, Bayern continued to let the ball do the work and eventually opened the scoring through Bundesliga top scorer Lewandowski, who chested down Jerome Boateng's long ball into the box before tapping home from eleven metres in the 43rd minute.
After the restart, the "Bavarians" started where they left off as they thought they had doubled the lead but Lewandowski's back-heel goal was ruled offside in the 55th minute.
Bayern was in complete control, but things changed with the dismissal of Alphonso Davies, who was sent off for his second bookable offence in the 79th minute.
Bremen gained momentum and started an onslaught on Bayern's goal, but Manuel Neuer showed years of experience after tipping Yuya Osako's dangerous flicked header around the post in the closing period to wrap the win.
With the narrow defeat, Werder Bremen remain second from bottom, whereas Bayern Munich established an unassailable 10-point advantage atop the standings with two rounds to play.
"We are delighted that we have clinched the title. The team did a great job. Since Hansi Flick took over, the team has been playing attractive and successful football. My compliments to the team and coach," said Bayern Munich's CEO Karl-Heinz Rummenigge.
"Compliments to the whole team. We played sensational football in the last few weeks. We have reached our first goal but we also want to win the German Cup now. Of course, we also want to win the Champions League but for now, we have to continue step by step. It will be hard enough," said Bayern Munich's head coach Hansi Flick.
Elsewhere, Jonas Hofmann's double strike helped Borussia Monchengladbach to overpower Wolfsburg 3-0.
Last placed Paderborn was relegated into the second division after losing 1-0 to newly-promoted Union Berlin, who remain another season in Germany's top flight while Freiburg's joker Nils Petersen marked the 2-1 winner to edge Hertha Berlin.