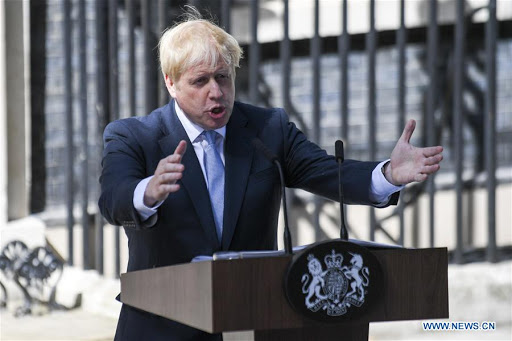 Johnson will tell the EU leaders that the Brexit talks must be concluded by autumn "at the latest," because the public and businesses affected by Brexit need certainty, British press The Telegraph reported Sunday.

At the teleconference, the prime minister will also demand a "high-quality Free Trade Agreement" that is "consistent with others the EU has agreed, as part of a balanced overall outcome," according to the Express newspaper.

Meanwhile, Brussels has warned that it would not brush aside the bloc's economic interests in a bid for a deal.

One senior EU official told British media that Monday's meeting was simply scheduled in the withdrawal agreement, "so it is happening but no one expects much."

Michel Barnier, EU chief negotiator for Brexit, has said that while he is open to some compromises, any deal must be reached in the overall long-term political and economic interest of the EU. Last week, he accused Britain of "looking to maintain the benefits of being a member state" in the bloc.

Britain and the EU concluded their fourth round of talks last week, during which they made no progress on the most difficult areas where differences of principle are most acute, notably on fisheries, governance arrangements and the so-called level playing field.

Friday, Gove tweeted that "I formally confirmed the UK will not extend the transition period and the moment for extension has now passed. On 1 January 2021 we will take back control and regain our political and economic independence."

Britain ended its EU membership on Jan. 31 but is still following EU rules during the transition period until Dec. 31 to enable a permanent future trade deal to be reached. During this period, Britain would have to pay into EU funds but have no say on laws imposed by Brussels.