Death of George Floyd triggers protests against racism, brutality across the globe 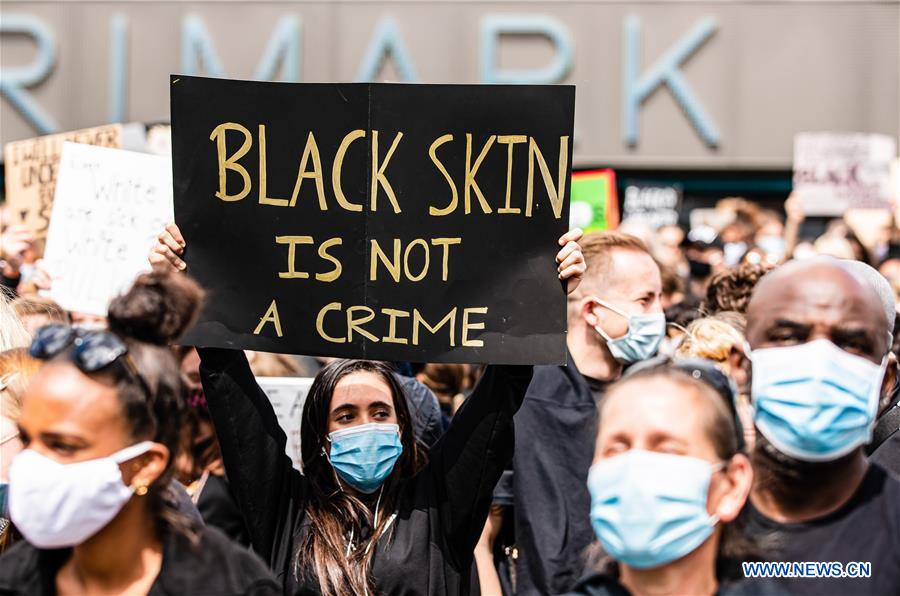 BEIJING: Outrage over the death of George Floyd have sparked a wave of protests in the United States and beyond, with citizens voicing their opposition against racism and police brutality, as well as demanding justice and social fairness.

Floyd, the unarmed African American, was suffocated to death after a white police officer knelt on his neck for almost nine minutes in Minneapolis, Minnesota, on May 25.

Chanting slogans while holding signs, thousands of protesters marched to Washington, D.C. on Saturday, staging what is expected to be the largest demonstration in the nation's capital against racial injustice and police brutality.

After eight days of protests that ebbed and flowed in the district, people from around the country gathered with renewed momentum, streaming into the capital from nearby places such as Arlington, Virginia.

Tens of thousands of people in Germany demonstrated against racism and police brutality in the United States. Many of the demonstrators in black clothes carried banners supporting the Black Lives Matter movement. Organizers called for a silent demonstration lasting exactly 8 minutes and 46 seconds, the time it took for Floyd to lose consciousness as the police officer knelt on his neck.

In Berlin alone, police said around 15,000 participants gathered at Alexanderplatz Square, despite the minimal distance order during the COVID-19 pandemic. In Munich, around 25,000 demonstrators took to the streets, but according to the police, only 200 people had registered for the event. The meeting area was finally expanded to make more space to allow demonstrators to follow the social distancing order.

In Hamburg, the police said a total of 14,000 people joined the demonstrations in two almost simultaneous rallies at Jungfernstieg and Rathausmarkt, but only around 800 were allowed because of the anti-coronavirus measures.

Thousands of people also went down on their knees on the streets outside the U.S. embassy in Ireland, which was the third of its kind following the killing of George Floyd, demanding a systematic change to the deep-rooted racism existing in America as well as in other places.

On May 31, a group of around 100 people staged a peaceful protest outside the U.S. embassy in Ballsbridge, while another group of people held a demonstration outside the official residence of the U.S. ambassador to Ireland.

One day later, thousands of protesters marched miles from downtown Dublin to the U.S. embassy where they observed a minute's silence for George Floyd and demanded justice for him by shouting different slogans, including the desperate words of "I can't breathe."

On Saturday, tens of thousands of people rallied in Paris and several other French cities to pay tribute to Georges Floyd.

Protestors turned out massively at Place de la concorde and the Champ de Mars near the Eiffel Tower to show their solidarity with widespread demonstrations in the United States. In Lyon, Rennes, Marseille, Bordeaux, Lille and Rouen, people also defied the sanitary ban to join the rally against racism and police violence.

Across Britain, thousands of people on Saturday joined Black Lives Matter protests. Protesters in central London took the knee during a minute's silence before beginning chants of "no justice, no peace."

Many anti-racism demonstrators wore masks and social distancing measures were encouraged during the events in London, Manchester, Cardiff, Sheffield and Newcastle, among other cities.

Huge crowds marched Saturday in Black Lives Matter demonstrations in cities across Australia, including Sydney where a Supreme Court decision banning the protest was overturned at the last minute.

Thousands of people turned out in Brisbane and Adelaide, with even larger crowds in the more populous cities of Melbourne and Sydney, after the New South Wales (NSW) State Court of Appeal ruled in favour of authorising the Sydney protest.

Minutes before the demonstration was scheduled to begin, and after a large crowd had already gathered, the news came through that the protest would be considered lawful, with police aiming to accommodate the demonstrators while maintaining peace.

The president stressed the need to address the legacy of racism that has resulted in blacks living in impoverished areas far from places of work and opportunity.

"We must press ahead with policies of redress and affirmative action to bring more black men and women into the world of work," he said.