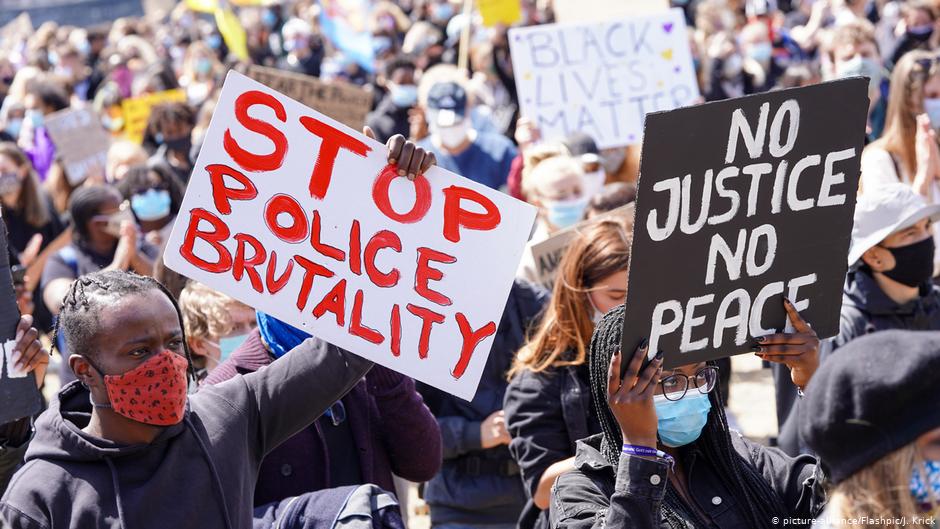 Fresh anti-racism protests kicked off across Germany on Saturday, with demonstrators filling up city centers from Berlin to Dusseldorf.

Thousands gathered in Alexanderplatz in Berlin's city center, holding signs that said "Black Lives Matter" and "No justice, no peace." Demonstrators, many of whom were dressed in black and wearing facemasks, also held up placards with slogans such as ''Be the change,'' ''I can’t breathe,'' and ''Germany is not innocent.''

Police estimated that there were around 15,000 protesters present at the demonstration, which was held in solidarity with demonstrations in the United States against the killing of an unarmed African-American man, George Floyd.

Forty-five minutes into the event, officers took to Twitter to declare the square ''full'' and ask people to stop arriving. Only 1,500 people had registered for the event, which police said was ended voluntarily by organizers after several hours.

Organizers also called for a silent demonstration, with protesters observing a silence lasting eight minutes and 46 seconds, representing the amount of time it took for Floyd to lose consciousness as the officer knelt on his neck.

"The #Alex is packed. No more people are being allowed in. Distancing is not possible," one user tweeted.

Berlin police said they arrested some demonstrators after a group threw bottles and stones at officers. One officer was injured, while in another incident, a press photographer was hit in the head by a bottle, police said.

Meanwhile, another 20,000 people attended a rally in the southern city of Munich, while 8,000 gathered in Frankfurt. Most of the protests were peaceful, however, in Hamburg, where 14,000 people gathered, three officers were injured in an altercation with a group of protesters throwing fireworks at the end of the rally.

Hamburg police tweeted that several hundred "hooded and aggressive people" had put police officers under pressure in the city center, adding: "We have already had to use pepper spray. With all due respect for emotions: attacks on police officers are unacceptable!"

Cologne, Münster and Nuremberg also drew large crowds, along with smaller cities such as Flensburg in the northern state of Schleswig-Holstein.

"Thank you #Flensburg, it is an honor to be here. No to racism and fascism, for borderless solidarity. Anti-racism must become practical, every day,” Lorenz Beutin, the climate and energy speaker of Die Linke (the Left) Party tweeted.

The demonstrations also took place in London, Amsterdam, Paris and Warsaw. Protests in Madrid and Brussels are also scheduled on Sunday.

''It is time to burn down institutional racism,'' one speaker shouted through a megaphone outside of the UK's parliament building, according to a news agency. ''This is how we take care of each other,'' she said, after urging everyone to put on a facemask. ''This is how we stay alive.''

In Italy, hundreds demonstrated in front of the US Consulate in Naples, chanting ''Freedom!'' and ''No justice, no peace, (---) the police'' in English and Italian as they clapped and carried signs and a banner printed with ''Black Lives Matter'' and a clenched black fist.

In Paris, following a demonstration that drew 20,000 on Tuesday in support of the family of Adama Traore, a young black man who died in police custody in 2016, French police banned Saturday protests that were planned to take place outside the US Embassy and on the lawns near the Eiffel Tower.

The Paris police department said on Friday it had implemented the ban because of risks to social order and health dangers from large gatherings due to the coronavirus pandemic.

However, demonstrators tried to gather in front of the US Embassy despite the ban. They were met by riot police who turned people away on their way to the embassy, which French security forces sealed off with metal barriers and roadblocks.

''You can fine me 10,000 or 20,000 times, the revolt will happen anyway,'' Egountchi Behanzin, a founder of the Black African Defense League, told officers who asked for his identification.