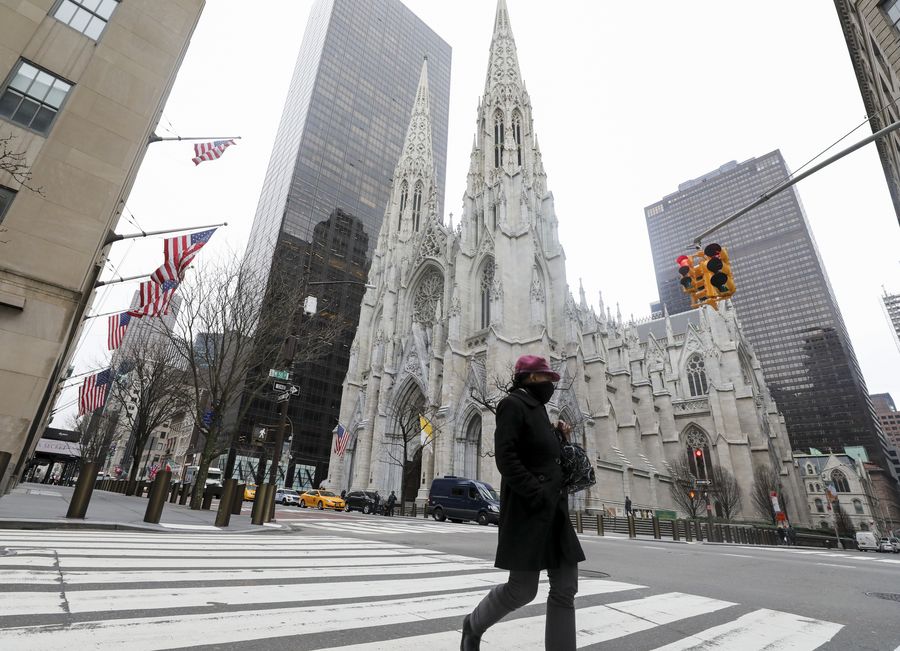 NEW YORK: The US state of New York is reopening faster than expected due to the progress in various metrics in combating COVID-19.

The death toll from the coronavirus in the state dropped to a new low since the beginning of the pandemic at 35 on Friday, Governor Andrew Cuomo said on Saturday at his daily briefing.

"This is really, really good news. Compared to where we were, this is a big sigh of relief," he said.

Meanwhile, the number of total hospitalizations in the state was down on Friday to 2,603 from a record-high of 18,825 during the peak of the pandemic.

The governor announced that the state's places of worship will be permitted to reopen with 25 percent occupancy during phase two of reopening, and visitors must follow social distancing protocols.

Places of worship in the state's seven regions that are already in phase two will open on Sunday, he said.

As offices have started to reopen in phase two, the governor said he would issue an executive order allowing commercial buildings statewide to conduct temperature checks for people entering the building.

"We're giving commercial buildings the right to take the temperature of everyone who walks into a building. It's not just your health, it's the people you could infect," he said.

Cuomo noted that people still have to "stay smart" and follow all precautions and guidelines, because if the metrics start to change, "the reopening will have to be slowed down."

The state has reported 377,316 COVID-19 cases and 30,280 deaths. New York City, which is scheduled to enter phase one of reopening on Monday, has reported 206,511 cases, according to a tally kept by Johns Hopkins University.

New York City saw its first day without any confirmed deaths from COVID-19 on Wednesday, according to the city's Department of Health and Mental Hygiene, marking a hopeful point in the recovery of the country's epicenter of the pandemic.

The city has also announced universal COVID-19 testing for all residents with over 150 testing sites citywide. Over 1,700 contact tracers have been deployed across five boroughs, with particular emphasis on those hardest-hit communities.

The mayor unveiled on Friday a mobile testing program that could bring testing to people's front doors, starting on Monday with two testing trucks in two neighborhoods in Queens and the Bronx, and ramping up to 10 trucks in the next few weeks.

As the governor has appealed several times, de Blasio also urged anyone who has participated in the city's protests over the death of George Floyd, an African American man, to get a test.

"I want to keep reminding people. It is dangerous to be close together and people must keep social distance, and we got to get back to that clear understanding," he said on Friday.

Over 20,000 New Yorkers have been in various protests during the past two weeks, with many wearing face coverings but social distancing largely ignored.

New York City Mayor Bill de Blasio said earlier this week that more than 30,000 construction sites will reopen during the first phase, and up to 400,000 non-essential workers in construction, manufacturing and retail for curbside pick-up will be back to work.

As the city's public transit system is to face a surge of ridership in reopening, the New York Metropolitan Transportation Authority (MTA) is ready to return to normal service and has installed no-touch payment scanners in half of all subway stations to prevent contact, according to a plan released by the MTA on Friday.

Governor Cuomo also said on Saturday that the state is deploying over 1 million masks and 500,000 bottles of sanitizer to the MTA for its safe recovery.

However, the overnight service will not resume at this moment as the disinfection work of train cars each night from 1 a.m. to 5 a.m. will continue.