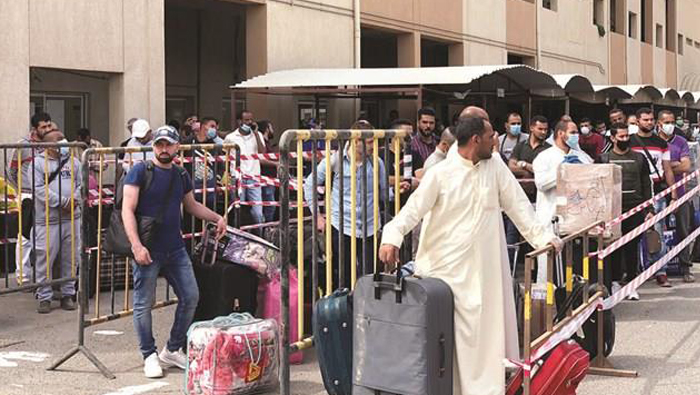 Muscat: The Gulf Cooperation Countries (GCC) will see a large number of expats going home, according to a recent report.
Low oil prices, declining revenues and lower rates of financial surpluses are trends that may reflect negatively on job opportunities and new projects in the Gulf, the report added.
"This could lead to a wave of layoffs for workers and employees and increase the departure of expatriates, further encouraging the specialisation of jobs for Gulf nationals at the expense of more than two million foreign workers," the report said.
A statement issued online by Oman News Agency (ONA), said, "A new study issued by the Gulf Council for Studies and Research, based in Kuwait, confirmed that the GCC and Arab states may see thousands of expat workers going back home because of deepening global economic recession and a slow recovery and stability of the oil prices below $40 until the end of 2022."
' The ability of Gulf governments to absorb the effects of the decline in sharp revenues from oil, gas, tourism and investment may be affected unevenly, despite its financial viability in the medium term," it added.
The study further states: "These effects cannot be remedied if the pace of diversification of the Gulf economies does not double, along with a reduction in huge government spending and a gradual independence from traditional work systems — especially the need for a shift in 'work for salary', in the short term, to a system of work that is strictly required to meet performance and efficiency standards."
The study further pointed out that due to the prolonged period of the spread of coronavirus in the GCC there will likely be, "Widespread salary cuts of expatriates in the near future as a result of austerity measures due to contraction of growth in the public and private sectors, as well as the possibility of stopping bonuses and other benefits."
Given the consequences of the pandemic being deeper than the global financial crisis, it may delay the phase of recovery leading to a large percentage of foreign workers leaving, in light of an expected increase in the percentage of lost job opportunities available to expatriates.
The statement added, "According to the estimates of the study, the partial cessation in the business and construction boom and possibly the volume of trade in the GCC countries due to the COVID-19 pandemic, may lead to the abolition of a large projects in the public and private sectors with the loss of thousands of jobs per day.