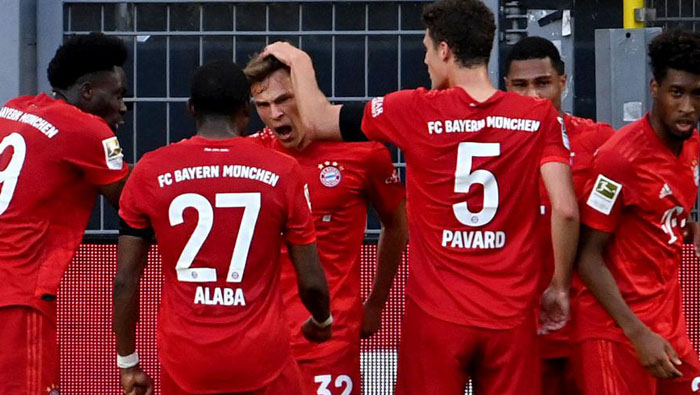 Berlin: A moment of individual brilliance by Joshua Kimmich settled Der Klassiker in Bayern Munich’s favour (1-0), delivering a lethal blow to Borussia Dortmund’s title hopes for another year.
Despite the absence of fans at Signal Iduna Park, this was a high quality and intense clash between Germany's two most famous teams. Both sides had seen shots cleared off the line in an intense first half, with Erling Haaland denied by Jerome Boateng after 30 seconds, and Lukasz Piszczek getting back to deny Serge Gnabry.
Dortmund enjoyed the best of the game but couldn’t find the net, and Kimmich punished Lucien Favre’s side emphatically with a gorgeous chip from 20 metres that beat Roman Bürki, despite his best efforts to claw it out.
Haaland withdrew through injury in the second half and, for all their fine build-up play, Dortmund never really looked like breaking down Bayern, and Robert Lewandowski could have rubber-stamped it late on, but saw his shot cannon back off the post.
Bayern now have a surely unassailable seven-point lead at the top, and are within touching distance of an eighth straight league title.
FT Borussia Dortmund 0-1 Bayern Munich — A massive three points for Bayern, who will surely make it eight straight Bundesliga titles now. Dortmund were good, but never really looked like scoring, and a high quality game was settled by a goal of the highest quality by Kimmich.