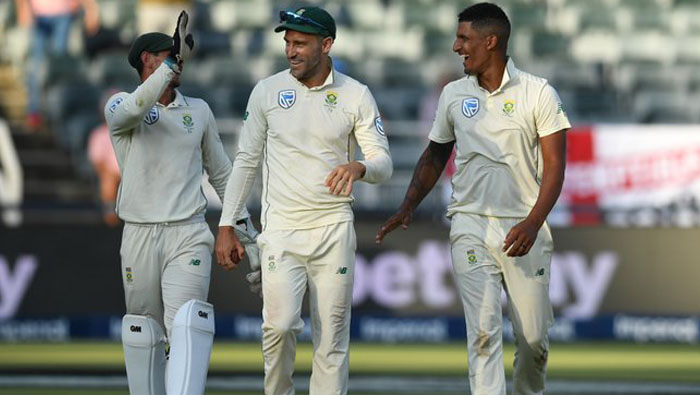 Newlands: Former South Africa captain Faf du Plessis, who gave up the position in February this year, now wishes to use his experience at the helm to help develop a young South African leadership group.
The 35-year-old felt it was the right time to vacate the captain's post across formats in the aftermath of his team's 3-1 Test loss to England at home. Over the years, du Plessis has accrued significant experience as South Africa captain, leading the side in 112 matches across formats and winning 69 of those.
Quinton de Kock has been named du Plessis' successor in limited-overs formats, but South Africa are yet to name a new Test captain. Du Plessis said his focus will now be on helping develop the leadership skills of not only those replacing him at the helm but a larger leadership group.
"I will miss the captaincy, but now I need to move on to try and add value to help create new leaders," du Plessis said. "This is something I’ve looked at as my real purpose for next year. I think leadership is something we need to place some emphasis on in South African cricket and again, it’s an area I want to help in."
Du Plessis admitted that the last few months of his captaincy tenure were especially taxing, with South Africa having suffered a first-round exit at the ICC Men's Cricket World Cup 2019 before losing Test series against India away and England at home.
"The season gone by is probably been up there with one of the toughest I’ve had to face over my career. Because it had a lot of different elements to it that were not just about cricket.
"Obviously it started with the World Cup being a very tough an emotional roller coaster for a lot of us, not just me... there were a lot of emotions that we went through and that was really tough.
"We went from there to India, which I knew would be a really tough tour for us as a team and a real big challenge for me to get through as a leader as well, but I was very optimistic. Obviously, the tour didn't go as well as we would have liked, we didn't play particularly good cricket, even though things started very well in that first Test. I learnt a lot from the tour about where we were as a Test team. Then it was a case of how we can move forward.”
But du Plessis is keen to continue as a player and believes that South Africa are on the verge of turning a corner.
"I still love playing for the Proteas, I still love being involved with a Proteas," he said. "I still see myself adding huge value. I’m still extremely motivated and keen to play for the Proteas in all three formats, so the hunger is there and I’m looking forward to it next season.
"Looking forward now, I think we’re in a position where I think we will start producing again. There are strong people in charge, plenty of experience and I think that will help South African cricket going forward."