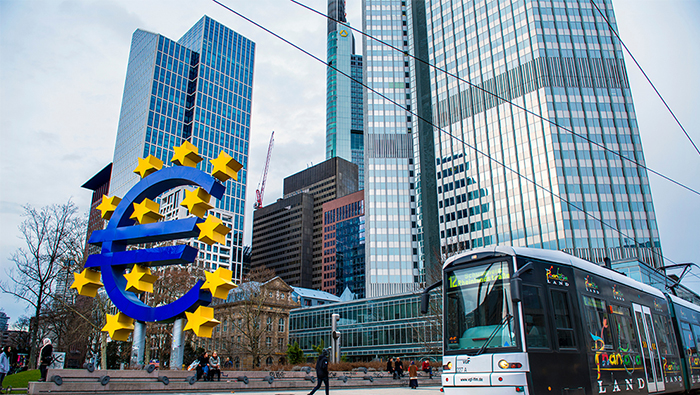 Frankfurt: The European Central Bank (ECB) decided to leave key interest rates for the euro area unchanged while introducing a series of new measures to boost its pandemic response.
The ECB Governing Council said the eurozone base interest rate will remain at 0.00 per cent, with the marginal lending rate and deposit rate remaining at 0.25 per cent and minus 0.50 per cent, respectively.
"We have kept our key interest rates at historically low levels, so borrowing costs remain low," the central bank said in a separate statement detailing its coronavirus response.

Boosted response
To support liquidity in the euro area, the ECB decided to further ease conditions on the targeted longer-term refinancing operations (TLTRO III) and introduced a new series of non-targeted pandemic emergency longer-term refinancing operations, namely PELTROs, which will be commencing in May 2020 and maturing in a staggered sequence between July and September 2021.
The newly announced measures added to the central bank's comprehensive response to the coronavirus crisis, including a 750-billion-euro ($816 billion) pandemic emergency purchase programme (PEPP) announced on March 18.
Together with its regular asset purchase program at a monthly pace of 20 billion euros, and an additional 120-billion-euro temporary envelope until the end of the year, the ECB's planned bond-buying scheme this year has exceeded 1.1 trillion euros.
"The Governing Council is fully prepared to increase the size of the PEPP and adjust its composition, by as much as necessary and for as long as needed," the central bank said.

Gloomy outlook
Data released by the European Union's (EU) statistic office on Thursday morning showed that economic output contracted by 3.8 per cent quarter-on-quarter in the euro area and by 3.5 per cent in the EU, marking the sharpest decline since records began in 1995.
"The euro area is facing an economic contraction of magnitude and speed that are unprecedented in peacetime," ECB President Christine Lagarde said in a video press conference following the monetary policy meeting.
Measures to contain the spread of the COVID-19 have "largely halted economic activity in all the countries of the euro area and across the globe" and caused a profound deterioration in labour market conditions, Lagarde said.
She pointed out that the first quarter is only partially affected by the coronavirus and the impact will be more severe in the second quarter given the sharp downturn seen in April.
Lagarde said the ECB staff suggests that euro area GDP could fall by between 5 per cent and 12 per cent this year, "depending crucially on the duration of the containment measures and the success of policies to mitigate the economic consequences for businesses and workers."
Moreover, headline inflation is likely to decline considerably further over the coming months given the tumbling of oil prices, Lagarde said, adding that market-based indicators of longer-term inflation expectations have remained at "depressed levels".

Effective response
Since the last ECB policy meeting on March 12, the central bank has rolled out a number of measures to counter the risks posed by the coronavirus pandemic.
Besides the PEPP, which Lagarde on Thursday called "the best tool we have in our toolbox," the central bank also enlarged the pool of collateral for banks, eased conditions for the targeted lending facility TLTRO III, and provided temporary capital relief for banks.
According to Thursday's decision, for those banks meeting the lending performance threshold, the interest rate applied from June 24, 2020, to June 23, 2021, on all TLTRO III operations can be as low as minus 1 per cent, 50 basis points below the current deposit facility rate of minus 0.5 per cent.
Lagarde said the combination of measures that the ECB is taking has been effective, which could be shown in the results of the latest bank lending survey. She emphasised that the ECB is closely monitoring the impact of its measures and will "make full use of the flexibility" embedded in the PEPP and other policy tools.
Lagarde also noted that the central bank welcomed the EU's 540-billion-euro aid package to support workers, businesses and sovereigns, and welcomed the European Council's agreement to work towards establishing a recovery fund to deal with the pandemic crisis.
Marcel Fratzscher, president of the Berlin-based DIW research institute, said the ECB has been "very successful" in preventing panic in the financial markets and stabilising the banks over the past six weeks.
However, the success of the ECB somehow relieved the pressure on politicians to act quickly and implement the necessary European solutions, Fratzscher noted, calling for more efforts towards a convincing EU recovery fund.