US states struggle to reopen businesses despite COVID-19 concerns 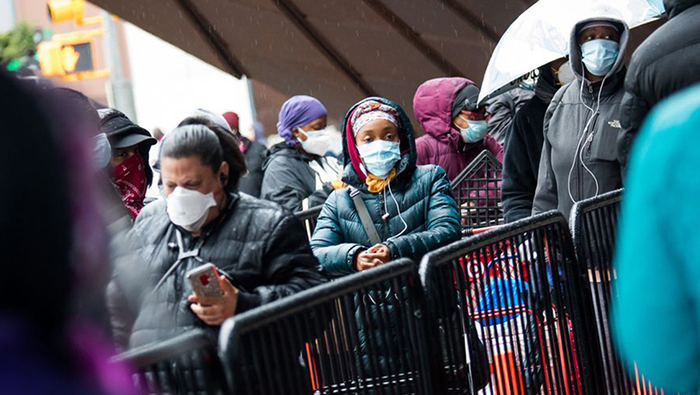 Washington: The US state of Georgia, which on Friday reopened some non-essential businesses, is among the boldest states in the country to do so, and a number of other states are expected to follow suit despite great concerns over COVID-19.
Georgia Governor Brian Kemp has allowed some non-essential businesses, such as gyms, barbershops, hair salons and tattoo parlours, to reopen their doors from Friday. In-person religious services can also resume this weekend, and restaurant dining rooms, theatres and some other businesses can reopen from Monday, according to the governor's order.
As of Friday night, more than 22,000 people in Georgia have tested positive and about 900 have died from the virus, according to data from Johns Hopkins University. The state has not seen a 14-day downward trajectory in the rate of new confirmed COVID-19 cases, a benchmark set by the White House's reopening guidelines.
Some salon and barbershop owners in the state said there will be no shortage of clients eager to support their businesses, while others said they will not reopen until they feel safe, local media reported.
"We lost graduations, proms and weddings," said David Huynh, a nail salon owner in Savannah. "Already I see stores closing down permanently ... A lot of people don't realise if the nation stays shut down any longer, there will be severe consequences."
Huynh on Friday had 60 appointments scheduled at his nail salon, which has been closed since last month, the Associated Press reported.
In a tweet earlier on Friday, US President Donald Trump reiterated his recent opposition to Georgia's partly reopening, saying "spas, beauty salons, tattoo parlours, and barber shops should take a little slower path."
Kemp, a Republican, said earlier this week that his order set out social-distancing and sanitation guidelines meant to balance the need to save lives with the need to save businesses.
However, the state is not the only one struggling to partly and gradually reopen its economy amid the dilemma. Data from Johns Hopkins University showed over 890,000 cases of COVID-19 have been confirmed across the country as of Friday night, with over 51,000 deaths reported.
The Congressional Budget Office said Friday that the unemployment rate around the country, which was near a 50-year low before the coronavirus struck, will surge to 16 per cent by September as the economy withers under the impact of the outbreak.
According to an order issued by Texas Governor Greg Abbott last week, retail businesses can offer curbside pickup or delivery to their customers starting Friday, for the first time in weeks. First Colony Mall in Sugar Land announced on its website that some stores and restaurants will open with limited hours or by appointment only; Memorial City Mall in Houston said it will provide contact-free curbside pickup.
Last week in Minnesota, Governor Tim Walz signed an executive order that reopened outdoor recreational businesses, including golf courses, bait shops, public and private marinas and outdoor shooting ranges. The order went into effect on April 18, the same day when New York joined Connecticut and New Jersey in opening up their marinas, boatyards and boat launches for recreational use.
Alaska Governor Mike Dunleavy on Wednesday also issued a health mandate that allows restaurants, stores, personal care services such as hair and nail salons and other non-essential businesses to open from Friday.
In Florida, Governor Ron DeSantis gave some municipalities the green light on April 17 to reopen beaches with restricted hours for walking, biking, hiking, fishing, running, swimming, taking care of pets and surfing. Schools in the southeastern state will remain closed through the end of the academic year, according to a USA Today report.
In Tennessee, restaurants will be allowed to open from April 27 for dine-in service with reduced capacity and retail stores will be permitted to reopen on April 29. Oklahoma and Montana have also issued aggressive plans that will see some businesses and churches open by the start of next week, said the report.
Several states have announced plans to coordinate their response with neighbours: California is moving forward in coordination with Washington and Oregon; governors from New York, New Jersey, Connecticut, Delaware and Rhode Island announced plans to form a joint task force.