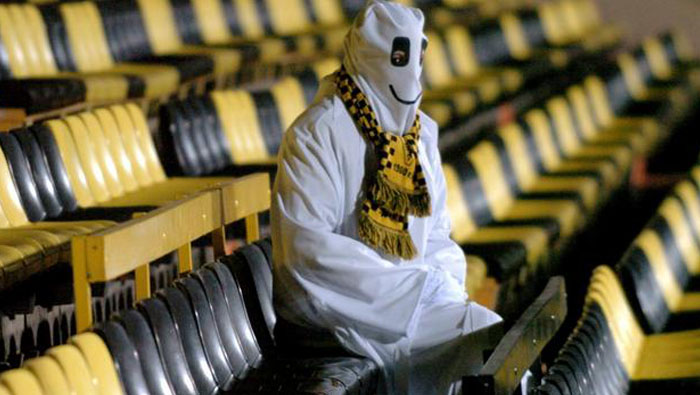 Berlin: It was an email to Schalke season ticket holders which set alarm bells ringing and made it clear just how precarious the current financial situation is for many Bundesliga clubs.
"Regardless of what decision is made, the club is facing a potentially existential economic threat," read the statement, referring to the ongoing uncertainty surrounding the continuation of the Bundesliga season. It also requested that fans do not demand refunds for Schalke's remaining home games in order to stabilise the club's finances and help it survive.
According to football magazine Kicker, 13 of the 36 clubs in Germany's top two divisions, the Bundesliga and Bundesliga 2, could be facing insolvency this summer should the season not resume. That is why the German Football League (DFL) is investigating the logistical and medical feasibility of completing the season behind closed doors, beginning in May.
The politicians will have the final say, of course, and the powerful minister presidents of Bavaria, the largest of Germany's 16 states, and North Rhine-Westphalia, the most populous, this week signaled in an interview with tabloid Bild that such a plan was "conceivable" under certain conditions.
Yet despite matches in empty stadiums, known as "Geisterspiele" (ghost games) in German, being seemingly the only way to guarantee the immediate survival of some clubs, the plan has prompted mixed reactions among supporters.
'Ghost games'
"There is a broad spectrum of opinions," said Michael Gabriel, who coordinates Germany's Fan Projects, a network of pedagogical organizations which work closely with young football fans and ultras across the country. He said that the prospect of games without spectators puts hardcore fans in an unenviable position.
"The fans see themselves as an integral component of the game, and the idea of not attending matches is one of their deepest worries," he told DW. "But if their club's existence is at stake, it becomes very difficult and many are torn because, without the clubs, there are no games."
Earlier this month, a survey commissioned by public broadcaster WDR found that 52 per cent of people in Germany would be in favour of a restart behind closed doors, with only 30 per cent against.
But bodies representing active, match-going supporters have made it eminently clear where they stand. Fanszenen Deutschlands, a nationwide coalition of active fan groups, including many ultra groups, released a statement last week stating that "ghost games are not a solution," calling instead for fundamental changes to the structures of the game.
"The resumption of football, even behind closed doors, is not acceptable in the current situation," the statement read. "Professional football is already sick enough and belongs in quarantine."