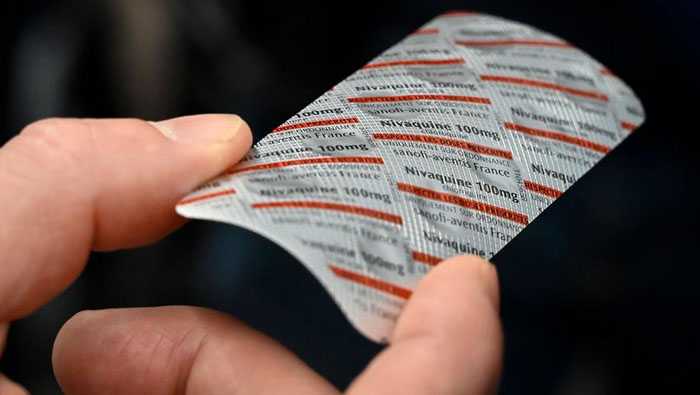 Rio De Janeiro: Too high a dose of the antimalarial agent chloroquine can cause severe cardiac arrhythmia in certain patients. Tests on COVID-19 patients in Brazil have been discontinued after 11 people died.
In addition to looking for a vaccine against SARS-CoV-2, doctors around the world are investigating whether existing active ingredients can also help combat the virus.
The well-known malaria drug Resochin has caused a great stir in recent weeks. Its active ingredient, chloroquine, with its derivative, hydroxychloroquine, have been used to prevent and treat malaria for decades.
In tests conducted in China and France, the active substance chloroquine was said to have shown that it inhibits the proliferation of the novel coronavirus in cell cultures, indicating that it could reduce the viral load of patients with more severe disease progressions. The active ingredient can therefore also be used as an antiviral drug, researchers report.
Despite some concerns about how the studies were conducted and their significance, as well as about possible side effects, clinical tests with the well-known active substance have now been carried out in other places.
Fatal study in Brazil
A small phase II study in Brazil, in which 11 patients died of fatal arrhythmias or heart muscle damage, shows how risky high-dose treatment of COVID-19 patients with chloroquine can be, especially in combination with the antibiotic azithromycin or other drugs.
The study, which was financed by the Brazilian government and whose preliminary, not peer reviewed, results were published on the scientific portal MedRxiv, involved 81 hospital patients. Altogether 440 patients were ultimately supposed to participate in the phase IIb study "CloroCovid-19."
Marcus Lacerda's team from the Tropical Institute in Manaus in the Brazilian state of Amazonas administered a dose of 450 milligrams of chloroquine twice a day for five days (total dose 2.7 grams) to about half of the patients. The other patients were prescribed a dose of more than 600 milligrams (total dose 12 grams) for 10 days. There was no placebo group.
Too high a dosage?
Normally, malaria drugs are used at a lower dosage and only for a few days. In Brazil, the dosage was even higher than suggested by the Chinese authorities and the US Center for Disease Control and Prevention (CDC).
The health authority of the Chinese province of Guangdong had recommended treatment with 500 mg twice daily for 10 days (total amount 10 grams). The CDC recommended an initial dose of 600 mg plus another 300 mg after 12 hours, followed by 300 mg twice a day on days two to five (total dose 3.3 grams).
The physicians in Brazil noticed arrhythmia (significant extension of the so-called QT interval) within two to three days in patients receiving the high dose. On the sixth day of the trial, 11 patients died and the phase II trial was stopped immediately.
Were warnings ignored?
Last week, internal medicine specialists had already warned in the Canadian Medical Association Journal about the dangers of QTc prolongation in the electrocardiogram when using chloroquine and hydroxychloroquine — especially in combination with the antibiotic azithromycin.
According to that report, the combination can lead to hypoglycemia (abnormally low blood sugar levels), restlessness, confusion and delusions, in addition to cardiac arrhythmia. An overdose can lead to epileptic seizures, coma and cardiac arrest, the report says.