Greater access to education through football in African countries 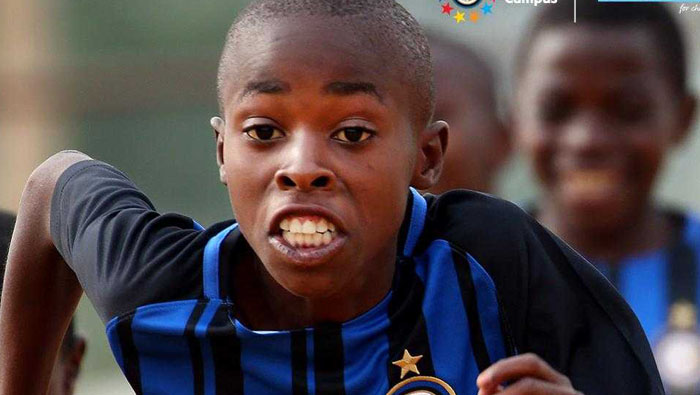 Nyon: The UEFA Foundation for Children, in collaboration with Inter Campus, is supporting projects in Angola, Cameroon, the Democratic Republic of Congo and Uganda to give children greater access to education through football.
Children in four sub-Saharan countries are benefiting from the partnership between the UEFA Foundation for Children and Inter Futura, an organisation that falls under the umbrella of FC Internazionale Milano.
Inter Futura helps to run Inter Campus – a social project that helps thousands of children in need around the world every year. Inter Campus and the UEFA Foundation for Children have previously collaborated on two projects in Israel and Palestine, as well as in Venezuela.
The Inter Campus Black ’n Blue project is taking place in Angola, Cameroon, the Democratic Republic of Congo and Uganda. The aim is to improve children’s education by using football as the catalyst. In order to break down barriers between different communities, local representatives have the opportunity to meet and share their personal experiences.
Four countries
Although there are a number of issues that need to be addressed in each of the countries, with these main topics having been prioritised for each:
Angola: Health improvement and crime prevention, using football as a preventive and developmental tool for at-risk children.
Cameroon: Improvement of ethnic integration, especially in rural areas, using football as an educational tool for peace in a country where sport is considered almost a religion by many.
Democratic Republic of Congo: Targeting street children in rural areas and giving them assistance as early as possible.
Uganda: Improvement of gender equality to help to reduce poverty among women, using football as a catalyst to involve more children in education.
Supporting education through football
The UEFA Foundation for Children has teamed up with Inter Campus to try to improve the everyday lives of socially deprived children.
The issues faced can range from poor sanitary conditions to a lack of food, which affects the children’s physical development. Working on and off the pitch with a strong network of partners, Inter Campus hopes to alleviate these difficult conditions and create a virtuous circle from which future generations can benefit.
Inter Campus aims to support education through football and sport, as well as improving gender equality by encouraging the participation of girls. The activities are being delivered through 16 one-week clinics and monitoring visits (four per country). Specialised programmes are also being created based on local partners’ knowledge and Inter Campus’ experience.
The aim is to involve 1,500 children a year across the four countries. A delegation of local coaches will also be given special training to pass on the expertise they have gained to their local colleagues and thus benefit thousands of children across the four countries in years to come.
“I am delighted the fruitful partnership between Inter Campus and the UEFA Foundation for Children will be continuing for another two years,” said the vice-president of FC Internazionale Milano, Javier Zanetti, who also played for the club in a career which spanned almost two decades.
“This is the third project we will work on together, after projects in Israel and Palestine, and in Venezuela, and as always, both our organisations share the same goal – to help and improve the lives of as many children across the globe as possible.”
Football is a powerful tool
UEFA president Aleksander Čeferin chairs the foundation’s board of trustees and hails the work undertaken since 2015, and how football is proving to be a major force for social good.
“Having had the opportunity to be personally involved in various projects, I have seen that football is an extremely powerful tool,” said the UEFA president.
“Whether it is in refugee camps across the world, the troubled suburbs of European cities or forgotten conflict zones, all the activities supported by the UEFA Foundation for Children have strengthened my desire to see European football assume its role in the social development of young people all over the world.”