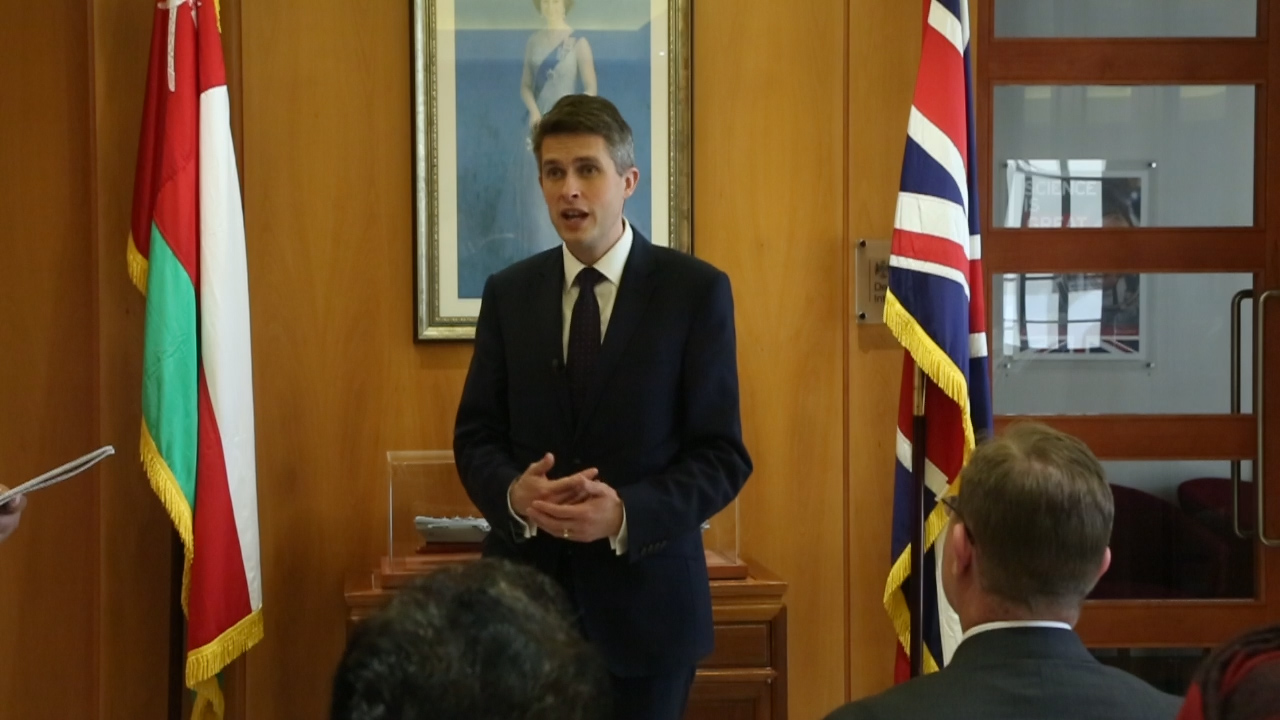 MUSCAT:Oman has a critical role to play in maintaining regional peace and stability, according to the UK’s Secretary of State for Defence Gavin Williamson.

“I think Oman, especially His Majesty Sultan Qaboos bin Said, plays such a special, pivotal role. The statesmanship, the knowledge, the wisdom that His Majesty brings to all these discussions is something that is recognised around the world,” said Williamson.
“The role that Oman can play in being able to talk to all sides is so critical and so important because in order to bring peace, stability, and build for the future, you need visionaries such as His Majesty the Sultan and nations such as Oman that are sometimes able to reach across the divide and actually heal wounds.”
He added, “It is this spirit of compromise and understanding that will be the pathway to peace and (solve) so many critical problems that have plagued this region for far too long.”
The comments were made during Williamson’s recent visit to the Sultanate, where the UK and Oman both signed the Joint Defence Agreement on February 21, 2019.
Speaking to members of the press, he said, “As our Prime Minister stated a couple of years ago, ‘Gulf security is our security’.”
“We are looking at how to enhance that further. That is part of the reason we decided to sign the Joint Defence Agreement with Oman. Oman is one of our oldest friends not just in the Gulf but in the world.”
The agreement, according to Williamson, marks a historic moment for defence ties between both countries.
“It is about how we work closely in the future with our armed forces. Britain has made it clear that our commitment is not just to the security of Oman but to the entire Gulf region. This is about training together,” he stated.
The agreement aims to align the two countries’ views on security, stability, and prosperity of their people.
Additionally, it aims to deepen military relations and ensure the commitment of both countries towards bilateral military cooperation and mutual defence frameworks to lead to the integration of the armed forces of both nations. It is also intended to support its sovereignty and territorial integrity.
“My hope is that it (the agreement) builds on that common shared interest between our two nations, not just in terms of defence, but in the future in how we can enable more cooperation in the fields of education, in terms of the economy, in terms of creating jobs, growth and the prosperity that Oman and Britain value so highly.”
While addressing the media, Williamson spoke about the UK’s upcoming departure from the European Union, which is scheduled to happen on March 29, 2019, and the “Global Britain” concept.
“It’s about Britain being involved. Britain is willing to act and stand by its friends, such as Oman, in terms of their defence, their interests, their territorial integrity and actually working together to seize the opportunities that we can take together,” said Williamson.
“What we have committed to doing is spending three billion pounds in the whole region over the next few years because we understand that these friendships that we have are the ones that are important to continue to invest in,” added Williamson.